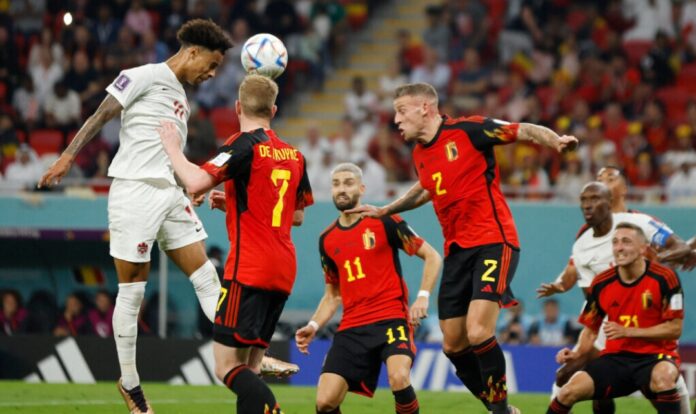 Belgium’s Red Devils narrowly beat the Reds of Canada on their opening game of the 2022 FIFA World Cup tournament in Qatar on Wednesday night to start their campaign.

The Europeans were given a very good run for their money by the North American side who deserved at least a point for their effort throughout the the 90 plus additional time period of the match.

Canada played without fear especially in the second 45 minutes of the match after matching their opponents boot-for-boot despite being a huge underdogs for the game against the third) bronze winners of the 2018 tournament in Russia.

Canada’s pace and energy caused Belgium no end of problems throughout the first half, and paid early dividends when Tajon Buchanan’s shot hit Yannick Carrasco’s left wrist and a penalty was awarded after a VAR review. Davies’ spot-kick lacked both power and direction, however, and Courtois dived to his right to make the save.

Undeterred, Canada continued to pour forward, Junior Hoilett and Atiba Hutchinson both shooting wide from promising positions while Alistair Johnston’s fierce effort from the angle stung the palms of Courtois.

A goal looked to be coming – and it duly arrived, but at the other end of the field. Toby Alderweireld’s long pass found the run of Batshuayi as the Canada defence was caught out, and the Belgium striker made the most of the space he had found with an emphatic left-foot finish past Milan Borjan.

The goal was harsh on Canada, who might have been back on terms either side of the break, Buchanan lifting a Richie Laryea cross over the bar before Jonathan David steered a header wide from Stephen Eustaquio’s pinpoint delivery.

With Canada unable to exert the same pressure on the Belgium defence a second goal looked more likely at the other end, and only a superb Laryea challenge denied Batshuayi from Kevin De Bruyne’s pass. Courtois was perfectly placed to deal with Cyle Larin’s header as Canada attempted to mount a late rally, but Belgium held on.

Belgium won the game by a lone goal and will take on Morocco in their second group game on Sunday evening as Canada clash with another European country, Croatia who were the runners-up in Russia.