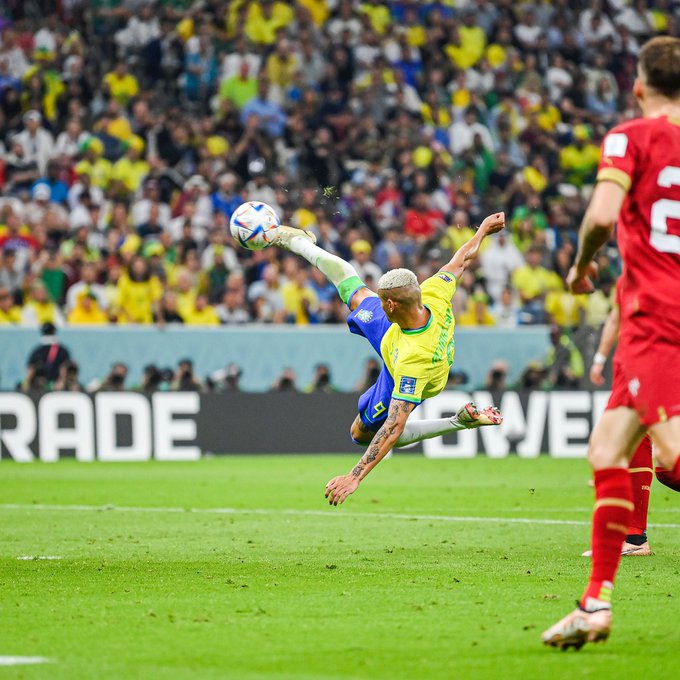 The Samba Boys from Brazil dance their way through The Eagles of Serbia hearts despite having a torrid time to break the defense of the guys in Red and Whites on Thursday night in Qatar.

The Yellow and Blue Boys proved their mettle in the second half of the match after facing a well disciplined European team in their opening game of the ongoing 2022 FIFA World Cup tournament in Qatar in Group G.

Richarlison’s rich run of goalscoring form for Brazil continued, as the five-time winners opened their Group G challenge at the World Cup by finally breaking the resolve of a determined Serbia — thanks to the Tottenham striker’s wonder goal in a second-half double.

Serbia had defended resolutely in the opening half but fell behind when Richarlison prodded home a rebound after Vinicius Jr’s shot was parried across the face of goal.

Up against a turgid Serbia side, Brazil struggled to entertain tonight. But in Richarlison, they found their showman.

But the best was yet to come from the Tottenham Hotspur forward.

Once again Vinicius Jr was the creator, with the Real Madrid man flicking a cross into the box with the outside of his boot.

Richarlison appeared to have initially miscontrolled the ball but he responded brilliantly, swiveling on the spot and acrobatically volleying the ball beyond Vanja Milinkovic-Savic.

Brazil dominated possession for much of the first half but were unable to ask too many questions of a well-drilled Serbia side. Instead, they were left relying on moments of individual improvisation and inspiration, Neymar’s clever inswinging corner only just clawed away by goalkeeper Vanja Milinkovic-Savic.

With Vinicius Junior looking Brazil’s most likely source of a breakthrough on the left, his opposite winger, Raphinha, went closest to finding a way through, after exchanging passes with Lucas Paqueta — only to prod his shot straight at the goalkeeper, who also saved sharply at the feet of Vinicius.

Brazil came out for the second half at an increased tempo, Vanja Milinkovic-Savic having to deny Raphinha within a few seconds of the restart, before Neymar sliced wide from Vinicius’ cross.

Alex Sandro then smashed a long-range effort off the post on the hour, but two minutes later, the South American side were in front. Neymar made the initial foray into the area, the ball breaking for Vinicius and, though Milinkovic-Savic kept out his low shot, Richarlison was on hand to turn in the rebound.

The Tottenham striker’s second goal was even more special — a flick into the air from Vinicius’ low cross preceding a spectacular volley that made it nine goals in his last seven international appearances.

Brazil continued to push forward in the closing stages, Casemiro curling a shot against the crossbar, but the South American side had already secured a solid opening victory.

I applied for GETFund scholarship at a time I needed help...