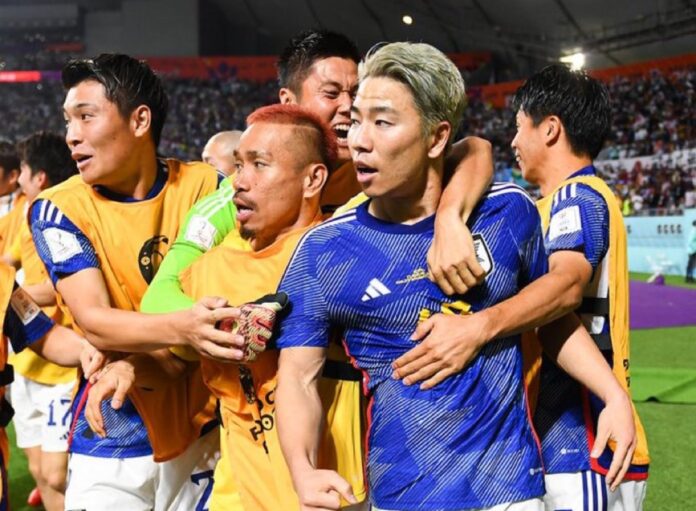 The German national team could not hold the powerful display from the Sumarai Blue as they crumpled under pressure to suffer an opening day defeat to the Asian country to kick start their 2022 FIFA World Cup on the low.

Germany had the greater share of the ball throughout the game but failed to do the needful against a vibrant Japanese team despite taking an early lead in the lead from the spot through Manchester City midfielder Ilkay Gundogan.

Despite being the better team for greater part of the match, Germany failed to get the insurance goal which helped the Japanese to grow in confidence as the minutes went by with their goalkeeper making some very decent saves.

Takuma Asano came off the bench to score a dramatic winning goal for Japan, who pulled off a 2022 World Cup shock by beating Germany 2-1 at the Khalifa International Stadium.

The winger, who plays for VfL Bochum in the German Bundesliga, made a huge impact on a game that had seen Ilkay Gundogan give Germany the lead through a first-half penalty, before Japan substitute Ritsu Doan equalised 15 minutes from the end.

That gave Asano enough time to latch onto Ko Itakura’s long ball forward and execute a sublime piece of control – reminiscent of Dennis Bergkamp for the Netherlands against Argentina at the 1998 World Cup – and score past Manuel Neuer to spark wild celebrations among the blue sections of the stadium.

Before the turnaround, the game had looked set to catapult Germany playmaker Jamal Musiala into the spotlight after the 19-year-old put on a superb display of skill in attack while Die Mannschaft led.

But the script was re-written by Japan’s super substitutes, and Samurai Blue have taken early control of Group E and with Spain next up for the Germans the pressure is well and truly on.

Germany exited the world cup group stages in the 2018 edition in Russia after losing their first game and could be facing same problem this year as they are left with games against Spain and Costa Rica.

3 editors of ModernGhana arrested over story on National Security Minister