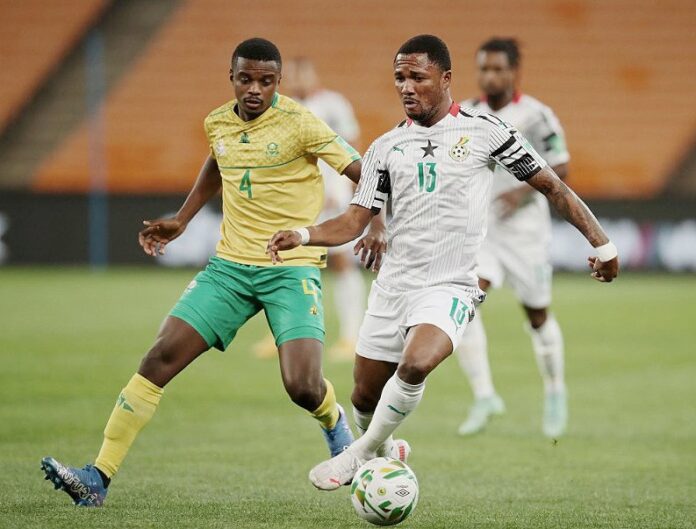 Ghana started the game better than they did against Ethiopia in last Friday’s encounter with a composed play in their buildup and controlled the game in the opening exchanges of the match.

Fatawu Mohammed sent a pinpoint pass to Joel Fameyeh but the attacker was brought down by the last South African defender who only saw a yellow card for his offence.

South Africa took over after 30 minutes and were a threat to the Ghana defense anytime they got into the Ghanaian half.

The Ghanaian team failed to get a single shot on target as the South African goalkeeper was on holiday.

South Africa came close to scoring when Richard Ofori failed to grab a free-kick at once but the Stars blushes was spared when Percy Tau blasted over the bar from the rebound.

Tau later scored a legitimate goal but only for the assistant referee to raise his flag to disallow the hosts the opener.

In the second half of the match, the home team were more determined to break the deadlock as they occasionally pushed Ghana to resort to defending.

Ghana’s goalie, Richard Ofori was once again left off the hook when he committed a howler but the South Africans striker missed from two yards out.

The home team scored the winner on the 83rd minute through Bongokuhle Hlongwane who capitalized on the poor defending from the Stars.

At the end of the game, Ghana had zero shot on target as they succumbed to a narrow 1-0 defeat on the road.

South Africa moves to first on the table with four points from two games while Ghana sit second with three points with Ethiopia and Zimbabwe set to play tomorrow.