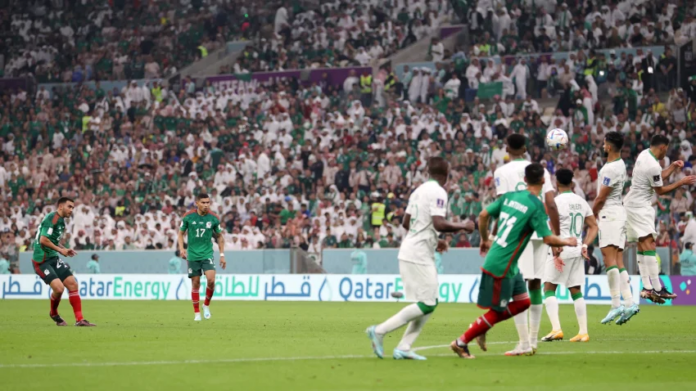 Suadi Arabia crushed out of the 2022 FIFA World Cup tournament in Qatar at the group stages despite beating tournament favourite Argentina in their first game with a 2-1 loss to Mexico in their last group game of the mundial on Wednesday night.

North America giant, Mexico’s proud record of reaching the Round of 16 in seven straight World Cups came to an agonising end as they beat Saudi Arabia but failed to progress after losing out to Poland on goal difference.

The Mexicans had not experienced a group-stage exit at a global tournament since 1978 and after missing several good first-half chances, they reignited their hopes when Henry Martin tapped home from a corner in the 47th minute.

Five minutes later they had qualification in their sights when Luis Chavez curled a brilliant free-kick left-footed over the wall and into the top-right corner from 25 yards.

With Poland trailing Argentina 2-0 by the 67th minute, Mexico were level on points and goal difference but behind the Poles in the Group C table by dint of having picked up more yellow cards.

Needing another goal at least, Henry Martin lashed a volley wildly over from close range and Orbelin Pineda curled another effort wide.

They still had hope heading into added time before Saudi Arabia captain Salem Al-Dawsari fired home a late consolation goal to finally put qualification beyond them.