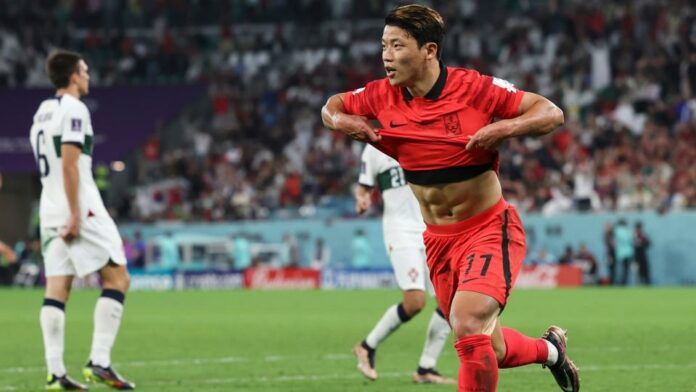 The Taegeuk Warriors of South Korea on Friday evening did the unthinkable as they came from a goal down to beat A Seleção of Portugal to advance to the next stage of the 2022 FIFA World Cup tournament in Qatar.

Hwang Hee-chan’s late strike sealed a comeback victory to send South Korea into the Round of 16 at the 2022 FIFA World Cup on goals scored ahead of Uruguay.

Paulo Bento’s side fell behind early on when Ricardo Horta stroked home Diogo Dalot’s cross to put Portugal, who had already secured their place in the knockout stages after wins over Ghana and Uruguay, in the ascendancy.

But South Korea, knowing only a win would give them any hope of progressing, responded well and Kim Young-gwon lashed home an equalizer in the 27th minute after Portugal had failed to clear a corner.

As the second half progressed, with Uruguay leading Ghana 2-0 in the other group game, South Korea knew that one goal would see them overhaul Luis Suarez and company into second place.

And in the 91st minute, they counter-attacked after a Portugal corner and Son Heung-min raced clear, before slipping a pass into substitute Hwang, who finished superbly.

South Korea still had to wait around nine minutes until the Uruguay-Ghana match concluded before their qualification behind Group H leaders Portugal was confirmed — and a probable last-16 meeting with Brazil.