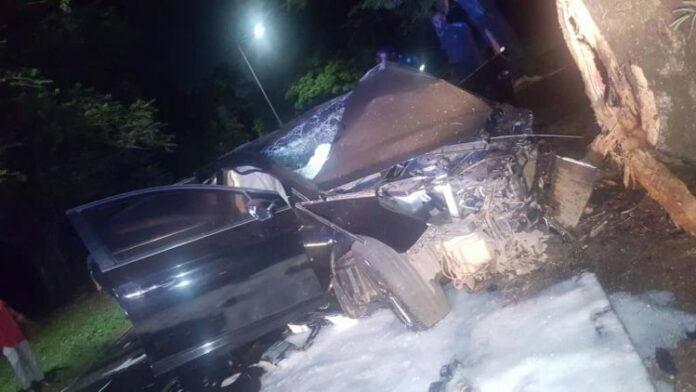 Three students of the Kwame Nkrumah University of Science and Technology (KNUST) have died in separate accidents on campus Saturday.

University authorities said the first incident happened after a vehicle carrying at least five occupants got involved in an accident about 3 a.m. local time.

Two of them were confirmed dead while the others, including a University of Ghana student were responding to treatment at the Komfo Anokye Teaching Hospital (KATH).

“They crushed into a tree by the roadside [on campus] and two of them lost their lives”, a University Relations Officer, Dr Daniel Norris Beckoe told Accra-based JoyNews.

“One is in a critical condition at the Komfo Anokye Teaching Hospital and two other occupants are in stable condition and are responding to treatment”, he added.

Just as students and management were reeling over the development, a 19-year-old student of the school also met his untimely death when he reportedly fell from the staircase on the first floor of the Unity Hall of residence.

He has been named as Cupson Larry Leslie, a Level 100 Mathematics student, a police source told dailymailgh.com.

“He went to the Unity Hall to visit a friend and whiles they were having a conversation, he passed out and fell on the staircase of the first floor and then hit the head against one of the staircases. He was rushed to the Komfo Anokye Teaching Hospital… but unfortunately we lost him too”, Dr Beckoe said.

Their bodies have been deposited at the Komfo Anokye Teaching Hospital for autopsy.

Parents of the victims have since been notified of the development, university authorities say.

“Management of the KNUST is deeply saddened by this event and we wish the bereaved families God’s guidance in this trying moments.

“We will put out the details when police conclude investigations”, the University Relations Officer said.