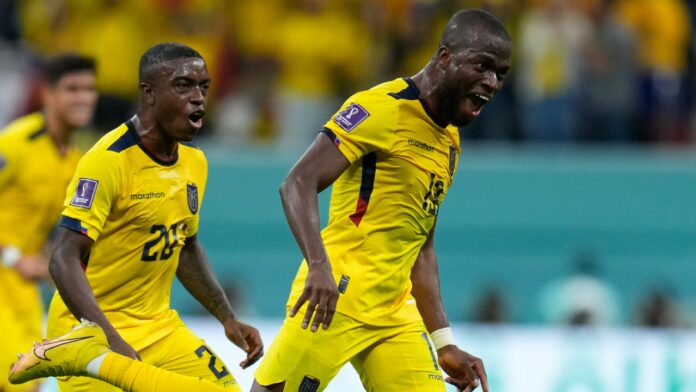 At 33 years and 16 days, Valencia is the oldest player to score the opening goal of a World Cup, beating the record previously held by Italy’s Alessandro Altobelli (30 years and 184 days) vs. Bulgaria in 1986.

The veteran striker is playing in his second World Cup after making his tournament debut in 2014, and the 33-year-old certainly made up for lost time by scoring twice inside the first 31st minutes to guide his country to victory.

The Fenerbahçe forward looked to have scored after only three minutes, but the goal was waived off on an offside call after a VAR review. Valencia would not be denied, though, and just 13 minutes later he gave Ecuador the lead when he calmly converted from the penalty spot.

Just after the half-hour mark, Valencia did it again, this time connecting on a powerful header that sailed past Qatar goalkeeper Saad Al Sheeb off a dangerous cross whipped into the box by teammate Ángelo Preciado.

As Ecuador’s captain and all-time top scorer (37 goals in 75 games), Valencia has now scored each of his country’s last five goals at the World Cup. If he opens the scoring in his team’s next Group A encounter, he’ll tie the tournament record for consecutive goals for one team, held by Eusébio (Portugal, 1966), Paolo Rossi (Italy, 1982) and Oleg Salenko (Russia, 1994), who all scored six in a row for their respective countries.

Questions were being asked of Ecuador prior to the World Cup, mostly about who would produce the goals for this offensively challenged side.

Valencia stepped up in a big way Sunday as the team’s main reference point in attack, but he limped off the pitch in the 76th minute and had to be subbed out of the game. Whether he’s seriously injured remains to be seen, but the South Americans will be hoping Valencia can continue based on the way he terrorized Qatar’s defence.

The game ended 2-0 to the South American side.