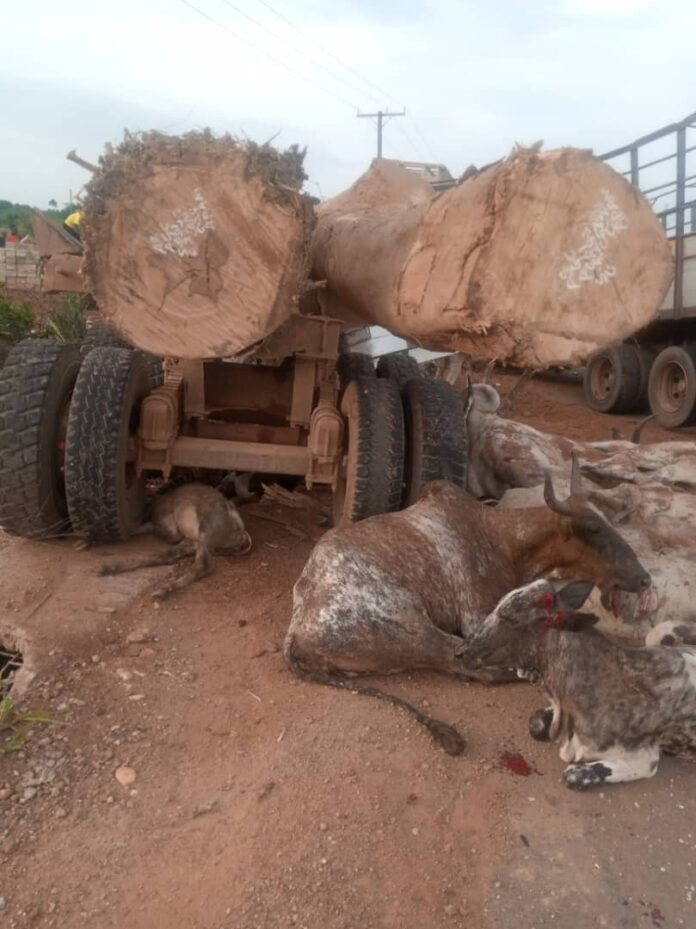 Four people were killed in a fatal accident on Tuesday on the Trede junction motor road in Kumasi, the police said.

Five others were admitted at the Komfo Anokye Teaching Hospital and are responding to treatment after sustaining injuries.

The accident which occured just before 6 p.m., involved a DAF trailer timber truck and a Mercedes Benz cargo truck.

The timber truck with registration number GR 1825-V loaded with eight timber logs was said to have exited the Trede Forestry check point and was heading to the Sokoban Wood Village.

“On reaching a section of the road at the outskirts of Konkori, the timber truck collided head-on with the Mercedes Benz cargo truck with registration number AS 8337 -Y loaded with cows and sheep from Kumasi direction towards Trede junction”, the police reveal.

Images widely published online show that some of the victims in the cargo truck got trapped after some timber logs fell on it. Some of the animals also died after fallen off the cargo truck.

The drivers of both vehicles were among the dead as the police MTTD at Trede said two others onboard the trailer truck died on the spot.

Police later named both drivers as Collins Andoh, 26 who was in charge the cargo truck and Abdul Samed aged 40, who drove the trailer truck. The other victims were yet to be identified.

Officers who are investigating the incident said both vehicles had been towed to the Trede Police Station for testing.