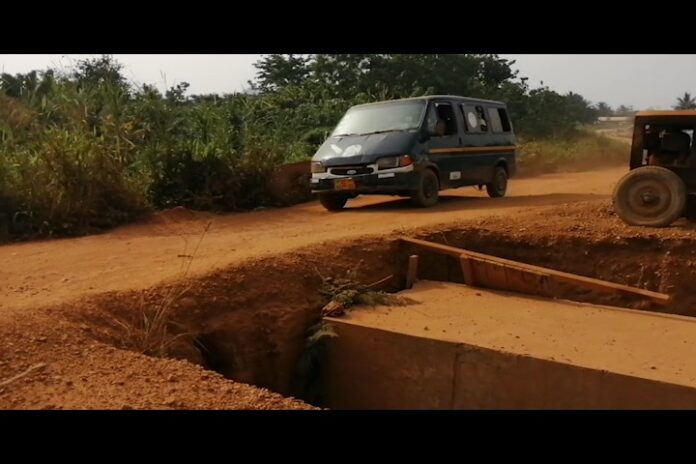 Residents living in the Amanchia-Esaase areas have threatened to demonstrate against the Ashanti Regional Chairman of the governing New Patriotic Party (NPP) Bernard Antwi Boasiako.

This follows the reported failure of Mr Boasiako’s company to complete the road project in these communities located in the Atwima Nwabiagya South Municipality of the Ashanti Region.

The road, according to residents, has now turned death trap, having claimed at least three lives and injuring many including a police officer.

The angry residents, who called into Kumasi-based Akoma FM on Monday, January 25 described to the Host, Aduanaba Kofi Asante Ennin of how unmotorable the road has become.

A visit to the project site by dailymailgh.com revealed heaps of sand and pits dotted along the road, putting lives of pedestrians in jeopardy.

“We are tired of this situation because more than three people have died on this road. If you are a new driver on this road, the possibility of driving into the death traps is very high.”

He further recalled how a police officer who was riding a bike fell into one of the uncovered pits and broke his left leg.

A resident, Kwadwo Anane said a they intend to hold a demonstration against the NPP Regional Chairman.

“He is incompetent. He cannot do the job”, Anane said.

“How can a regional chairman construct road?” He quizzed adding: “This is criminal”.

When called on the show for his reaction, Mr Antwi Boasiako affectionately known as Chairman Wontumi admitted his company has been awarded contract on the project but was quick to add that he was yet to receive funds to return to site.

He explained that “the project has delayed due to non-payment of funds from government, so I will plead with the residents to exercise restraint as I know right after the ministerial vetting, funds will be arranged and work will commence.”