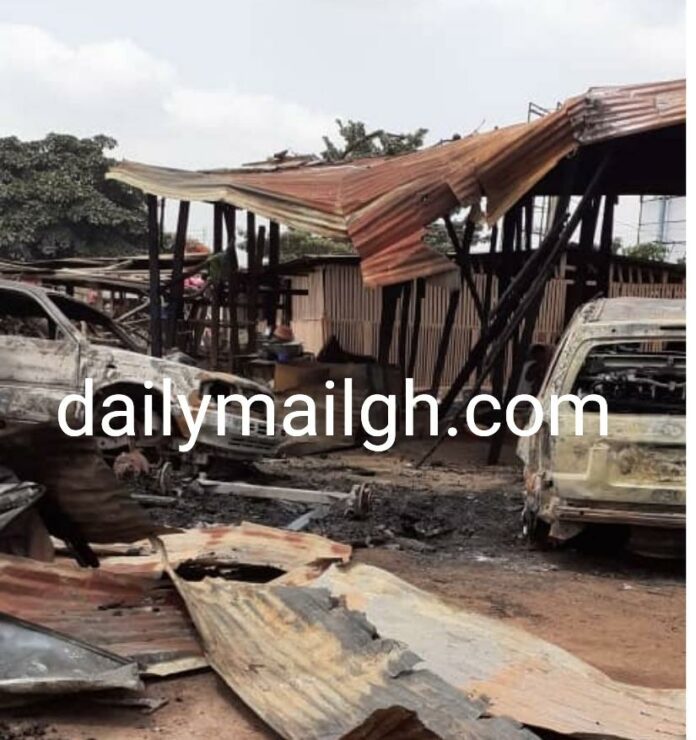 Five vehicles were totally burnt on Saturday in a fire outbreak at a mechanic shop near the Santasi roundabout in Kumasi.

The incident occured at about 1:00 am when the shop was closed, witnesses told dailymailgh.com.

A team of firefighters from the Kumasi Metropolitan Assembly Fire Unit were deployed to prevent the blaze from spreading to nearby shops.

When dailymailgh.com got to the scene, the fire had been put out except for some embers at parts of some of the vehicles.

Officials from the Ghana National Fire Service could not pinpoint what exactly caused the fire but said they were going to investigate the incident.

Fire has engulfed an apartment at Top High, a suburb of Kumasi in the Ashanti Region.

The Kwame Nkrumah University of Science and Technology (KNUST) District Fire Commander, Anthony Appiah said their preliminary investigations show that the fire was caused by a tenant who was cooking.

Mr. Anthony said the fire swept through about seven rooms.

“We received a call that there was a structure on fire around Top High. After extinguishing the fire within 10 minutes, we started our investigation, and we narrowed the cause to one room belonging to a lady”, he told Accra-based Citi FM.

No injuries were recorded in the fire incident.

A number of fire incidents have been recorded in the region over the past few weeks.

Fire recently swept through some wooden structures serving as makeshift shelters at the Dagombaline slum in Kumasi.

A few days ago, there was also a fire incident at the warehouse used for the storage of vehicle spare parts at Suame Magazine in Kumasi.

There was also a fire incident at the Republic Hall Mini Market at the Kwame Nkrumah University of Science and Technology, where over 10 shops were affected.