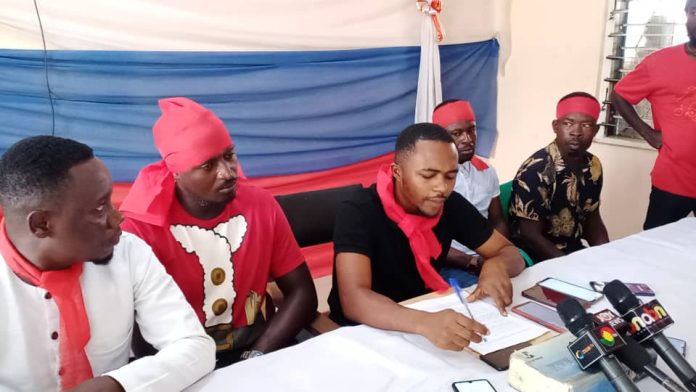 Some aggrieved members of the ruling New Patriotic Party in Fomena in the Ashanti Region are kicking against what they describe as an orchestrated attempt to impose the Independent MP for the area, Andrew Amoako Asiamah ahead of the 2024 parliamentary elections.

The party has suspended the polling station election in the area as it reorganizes its base to the national level.

At a press conference on Wednesday, 23 February 2022, some of the aggrieved members demanded answers for the move as they accused some top executives and MPs within the party of circumventing the party’s constitution to favour Mr. Asiamah who is currently the country’s 2nd Deputy Speaker of Parliament.

They advanced their argument on Article 3(9)(1) of the NPP constitution which indicates that: “a Member of the Party, who stands as an independent candidate against the officially elected member of the party, or who joins or declares his or her support for another political party, or for an independent candidate, when the party has sponsored a candidate in a general or by-election, automatically forfeits his or her membership of the party”.

Mr. Asiamah was the NPP MP for Fomena from January 2017 until his seat was declared vacant ahead of the 2020 election after he broke ranks to contest the election as an independent candidate.

“Despite the fact that Honourable Asiamah subsequently won the election and chose to do business with the NPP group in Parliament, there is no doubt that he is no longer a member of the NPP; and neither are his close associates who campaigned vigorously and openly for him in the 2020 elections.”

“Article 3(9)(2) of the Constitution also clearly stipulates that, upon forfeiture of membership, which Honourable Asiamah and his close associates did in November 2020, such persons may reapply for membership of the party and may be readmitted on conditions stipulated in the Constitution”, the group said adding they are unaware of a formal notification by the MP and his assigns of reapplying to join the party.

Convener of the group Michael Ankapong said: “It is for this reason that we find it quite strange and absurd that elements within the party hierarchy at the national level are trying hard to circumvent the laid down provisions of the Constitution, about Honourable Asiamah and his close associates, who abandoned the party in 2020 to pursue their parochial interests, for which they succeeded.”

He further called for more transparency with regard to the Fomena constituency “and the role of Honourable Asiamah in party matters, since he is not a member of our great party.”

“Failure to furnish us with responses to the aforementioned will leave us no option but to embark on a peaceful demonstration against the party throughout Fomena constituency in the coming weeks, to demand transparency and accountability and for the right thing to be done,” Michael said.