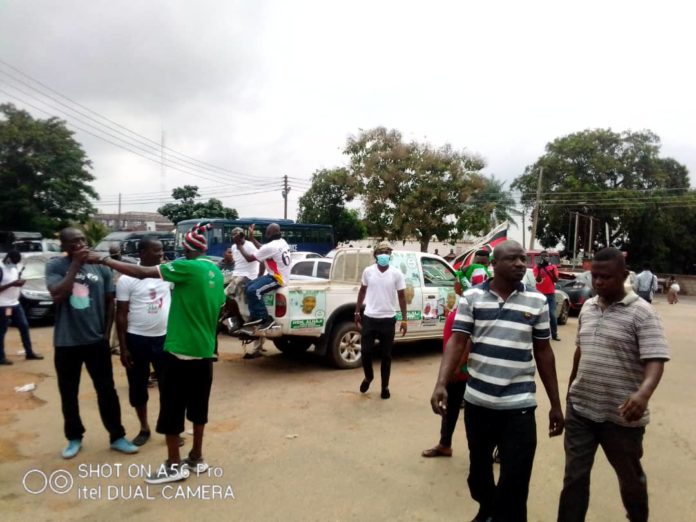 There is growing tension as supporters of the opposition NDC in the Asawase Constituency push to demand the immediate release of party members who have been detained by officers of the Ghana Police Service.

The armed police officers reportedly took over the office building of the MP for the area Muntaka Mubarak, arresting at least 10 party supporters at the scene.

Footages widely shared online show some NDC supporters at a police station demanding the immediate release of their members as they accused the ruling party and the Ghana Police Service of intimidation.

“We are not going anywhere”, a man is heard shouting in the video adding: “Under no circumstance will we leave here; you have no respect for our MP”.

“Useless police commander. This is an act of intimidation and we will not accept this in Asawase. It doesn’t make sense”, another is heard shouting in the Hausa language as an officer approaches him as others chanted party songs.

It remains unclear what triggered the Saturday night incident.

The party, in a statement released on Sunday morning, expressed outrage over the development and asked its members to converge at the Ashanti Regional Police Command to free their members.

“I am by this medium, calling and encouraging all our party members in the metropolis to mass up at the Central Police Station to protest and demand their immediate release from police custody”, a statement issued by the Regional Organizer of the NDC, Yaw Isham Bonsu, and sighted by Dailymailgh.com read in part.

The MP and Minority Chief Whip, Muntaka Mubarak is, however, expected to meet the police administration over the development, a close source told Dailymailgh.com.