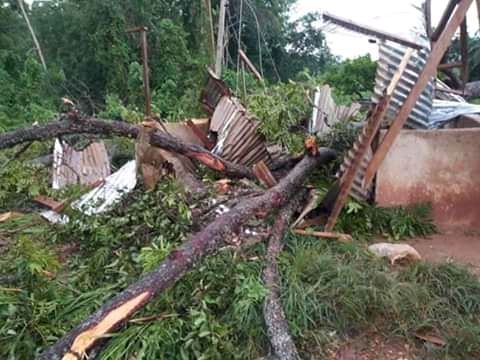 A Community Police Assistant has died after a fallen tree fell on top of him on Sunday, according to the police in the Ahafo Ano Division of the Ashanti Region.

The deceased has been named as Owusu Arhin, 35, who until his death was stationed at the Mankranso Police post.

A 55-year-old chainsaw operator, Isaac Gyan, is being detained and questioned over the incident which occurred at about 12 noon in the Ahiamankwa Forest near Kunsu Wioso in the Ahafo Ano South District.

The suspect was using a chainsaw to cut up the tree when the enormous trunk fell on top of the victim, the police said.

Emergency services rushed to save the man, but he was pronounced dead at the scene.

His body has since been deposited at the Mankranso Plus Lab Mortuary “for further action”, the police said in a report sighted by Dailymailgh.com.

A similar incident had earlier occured on Saturday at Motiakrom in the Upper Denkyira East Municipality of the Central Region.

The deceased, Eric Ntam, was seeking shelter under a tree during a downpour when the trunk eventually fell on him, witnesses say.