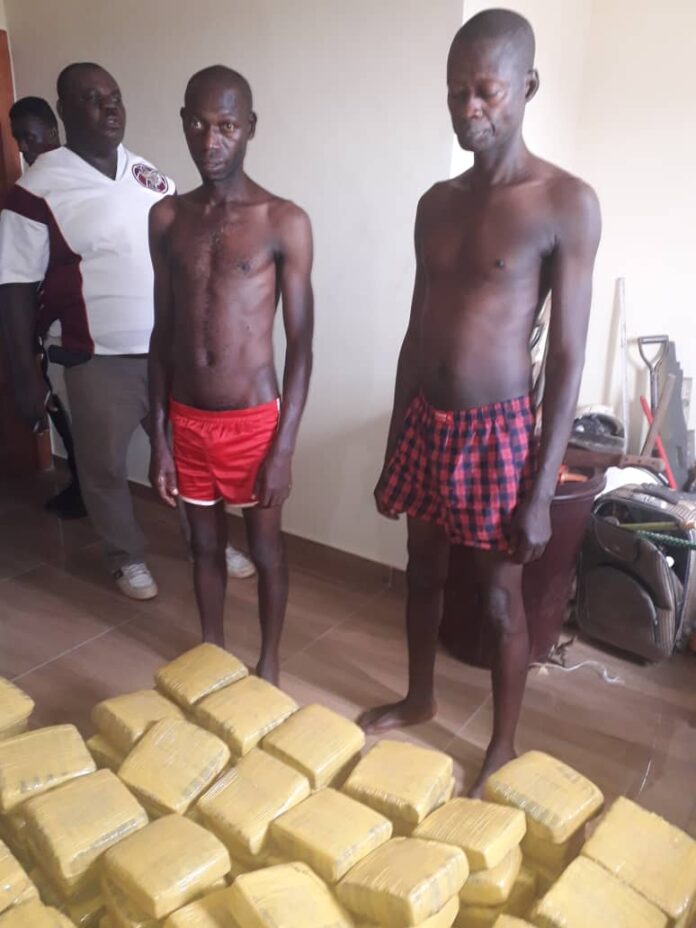 A routine operation by police in the Sekyere South District of the Ashanti Region has led to the retrieval of at least 220 slabs of drugs suspected to be Indian hemp.

Two persons; 59-yr-old Solomon Agyenim Boateng, a poultry farmer, and Kaasim Castro, a 45-yr-old labourer have been held for possessing the illicit drug.

He said the police during the operation arrested Kassim Castro on Sunday, November 1, at Kyei Garden, a popular location in Wiamoase known for harbouring drug peddlers and other criminals.

A backpack containing four compressed parcels of dry plant materials suspected to be narcotic drugs were retrieved from the suspect.

Castro then led the police to the poultry farm where six fertilizer sacs containing two hundred and sixteen (216) compressed parcels of dry leaves were retrieved from one of the rooms that stores poultry feeds.

“Upon interrogation, he conceded that the drugs belong to Agyenim Boateng, who is known to the police because last year we arrested him on similar offenses and he is facing a court”, the police chief said.

He added: “So currently we are conducting investigations; we want to know the source of his supply then we break that chain”.

In Ghana, all drug offenses, including purchase and personal use, are punishable by a mandatory minimum sentence of five years’ imprisonment. This rises to 10 years for possession.