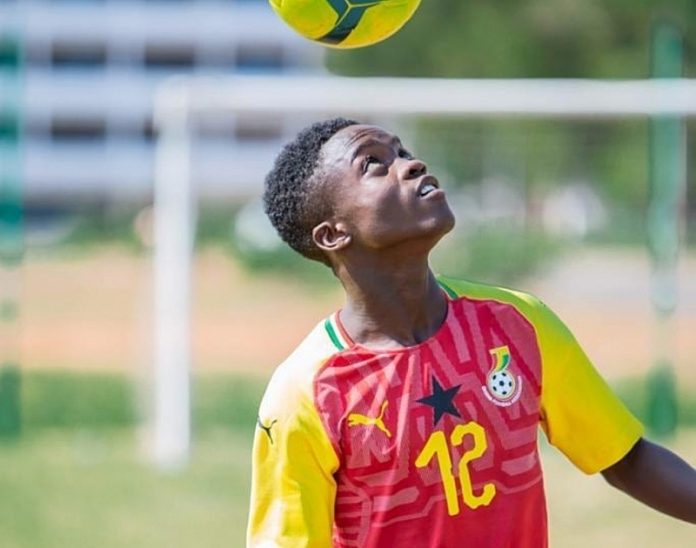 Shoulder-high, he was carried; with open arms, young Matthew Anim Cudjoe soaked the effusive praise raining on him from the stands.

Asante Kotoko had just come from behind to beat archrivals Hearts of Oak to a third successive President’s Cup, and the Baba Yara Sports Stadium was as ecstatic as ever — just not solely about the result.

Cudjoe played a small part in the victory, coming on only for the last 10 minutes or so, and getting neither goal nor assist. Besides, this was just his debut. No pressure, eh?

Well, against the land’s only other ‘big’ club, there was no hiding place and — for a lad who’d be turned away at any polling station during next year’s general elections if he dares show up — being thrown in at the deep end wasn’t going to be easy.

A well-worn cliché, but it certainly works here.

In his brief time on the pitch, all fans had their attention trained on this kid who, only last year, had emerged the hottest discovery from a nationwide talent hunt organized by Asamoah Gyan, Ghana’s all-time topscorer. It wasn’t just the spectators giving him all their eyes, though; Hearts’ big defenders did same.

Before long, he had their legs, too. Cudjoe got his fair share of kicks, one of which drew, at the death, the game’s only red card. Robert Addo — a man ten years Cudjoe’s senior — picked it up, but it could as well have been any of the opponents Cudjoe had skipped past with ease till that point. The home crowd, as Cudjoe writhed and the referee gave Addo his marching orders, was as vocal as it had been in response to the teen’s introduction by Maxwell Konadu.

For sure, Kumasi knows a potential star when it sees one.

There had been glimpses as Kotoko warmed up for the 2019/20 league campaign’s curtain-raiser, and rumor was rife that Cudjoe — who has already represented Ghana’s U-20s at a major international tournament — would have some role in the game. It really wasn’t much of a role, it turned out, but that didn’t stop the fans from reserving their loudest applause for Cudjoe. Dignitaries present, while handing out medals post-match, didn’t hide their admiration either. Sports Minister Isaac Asiamah held on to Cudjoe as he flashed his widest smile since Afcon 2019 ended; had the camera panned the other way, same would have been seen on the face of Ghana Football Association boss Kurt Okraku.

This was a good show, but it was only a preview of a future we might — or mightn’t — see. Aside his abilities to pick a pass and caress the ball with nimble feet, little was evident of just what Cudjoe brings Kotoko. Also not fully known is how long — and how much, given his tender age — he’d even be part of Maxwell Konadu’s team, but observers can only wait on the next move(s) by the boy’s handlers.

“We have received many offers from Germany, France, and England concerning my young client Matthew Cudjoe,” says Samuel Anim Addo, also a manager of Gyan and a member of the GFA’s Executive Council.

Of course, we’ve seen all of this before. The beginnings are almost always memorable. The end?

Hype, precocity, a decent debut, and playing for a good club in Ghana or even overseas do not a star make. It’s why we recall the likes of Kofi Abanga and Torric Jebrin with fondness over what they promised, but also with some regret over what might have been. And it’s also why everyone would monitor Cudjoe’s progress with keen interest henceforth.

For now, it’s all going pretty well — and long may it continue, wherever it does.

Cathedral of Doom: Concerns of Moslems brushed aside – Harruna Attah...