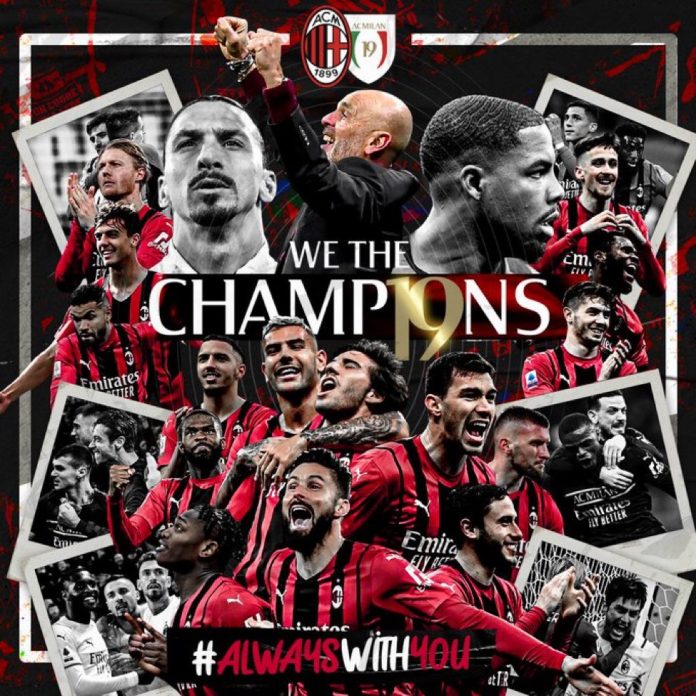 AC Milan won their first Serie A title in 11 years on Sunday after beating Sassuolo 3-0 to snatch the crown from local rivals Inter Milan.

Needing just a point to claim the Scudetto Milan swept their hosts aside thanks to an Olivier Giroud brace and another from Franck Kessie in the first half in front of an army of away fans at the Mapei Stadium.

Stefano Pioli’s Milan finished two points ahead of Inter, who beat Sampdoria 3-0 in the San Siro.

Fans partied in Milan and poured onto the pitch in Reggio Emilia as the ‘Rossoneri’ returned to the top of the Italian game after years of poor teams and financial problems since their last league crown in 2011.

Pioli’s side were imperious in winning their sixth match on the bounce and securing a title which for long tracts of the season locked like Inter’s to lose.

They were helped by a hat-trick of assists from exciting winger Rafale Leao, who has come of age this season and is reportedly a summer target for Paris Saint-Germain.

Giroud has struck some of the most important goals of Milan’s charge to the title and again showed why he is the man for the big occasion in the 17th minute.

Milan had already gone close through the France forward, Rafael Leao and Alexis Saelemaekers when Giroud was in the right place at the right time to sweep Leao’s low pass through Andrea Consigli’s legs and send the massed ranks of Milan fans wild.

Sassuolo immediately wilted in the face of a Milan onslaught and practically handed Giroud the chance to net an almost identical second just after the half-hour mark.

Leao was again the provider, this time robbing the ball from Gian Marco Ferrari before rolling another low pass over for Giroud, who lashed in his 12th of the season and made it party time in the stands.

And it was another poor mistake from a Sassuolo player four minutes later which allowed Milan to relax and enjoy the celebrations kicking off around them.

This time it was Maxime Lopez who was robbed by Rade Krunic, with Leao bursting this time down the right and cutting back for Kessie, who smashed in the third to sign off in perfect fashion ahead of his move to Barcelona as a free agent in the close season.

The second half was dedicated to the Milan celebrations and despite some spirited Sassuolo play it was only a matter of time before the away side sealed the title for a 19th time.

Government must be truthful to Ghanaians – Mahama