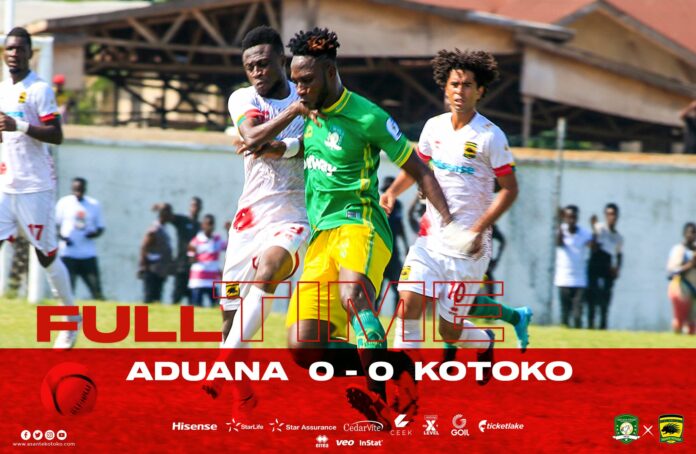 Aduana Stars were held to a goalless draw at the Nana Agyemang Badu Park on Saturday afternoon byKKumasi Asante Kotoko SC in the Week 27 encounter in Dormaa.

The home team were in high spirits and begun the game with high intensity controlling much of possession but were unable to make good use of their early dominance.

As the continued, the Purcupine Warriors found their way into the game and started playing some beautiful football as they forced their opponents into their own half.

Bioh kept giving the visitors problems at the back but failed to connect with direction to Sam Adam’s cross and quickly at the other end of the field, Kotoko almost took the lead with a fine effort from Mudasiru Salifu but his effort went wide.

Christopher Nettey latched onto Aduana Stars goalkeeper Joseph Addo’s loose clearance and tried to score from the center circle but his long drive was cleared off the line by Farouk Adams.

Few minutes later, the home team were denied what seemed to be a penalty after Mudasiru brought down Bright Adjei in the goal area but the referee waved play to continue.

Later on in the game, Sam Adams had a chance to score but his rushed attempt was parried away by Abalora to keep the score at 0-0.

The hosts went close again just a minute after the miss by Adams. Nurudeen Abdulai headed his ball against the upright with Abalora rooted to the ground.

Three minutes to the end of the first half, Adams once again fluffed his lines with a golden opportunity to make it 1-0 to the home team but the Kotoko goalkeeper came to his team’s rescue.

The visitors came into the second half stronger and had more opportunities in the second but could not make use of the chances as the game ended in goalless.

Kotoko move top of the league table after 27 matches with 47 points as Aduana moves 7th on the league log with 40 points.

Accra Hearts of Oak SC could return to the summit if they avoid defeat against Berekum Chelsea in Accra tomorrow.

A/R: Man kills self after gruesomely murdering wife at Adumasa