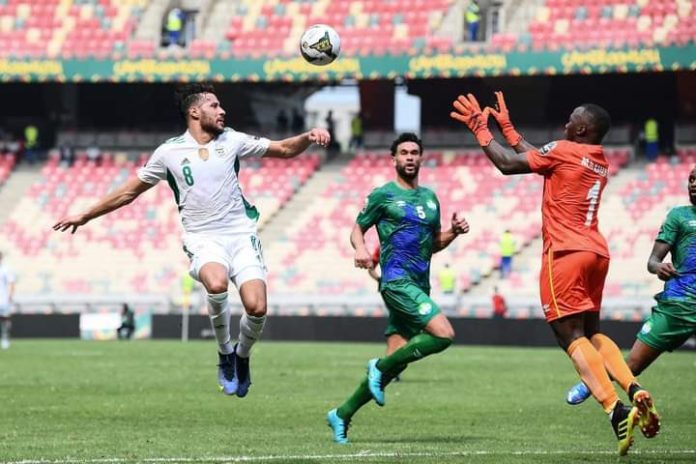 The Leone Stars of Sierra Leone held Africa Cup of Nations defending champions the Desert Foxes of Algeria to a goalless stalemate in their groups F opener on Tuesday.

The wWest Africans played beyond their strengths and kept the free scoring Algeria side at bay as the managed to pick a point in their thrilling encounter Tuesday afternoon.

It was a game of two halves as the Leone Stars created the best chances of the match in the opening 45 minutes of the end-to-end game.

Kai Kamara was a threat to the Greens defense and gave them something to worry about anytime he was on the ball for Sierra Leone in attack.

Alhaji KKamara scored for the Leone Stars but the flag went up immediately to cut short the player’s joy as he was caught in an offside position.

After the break, Algeria turned on the screws and started stamping their authority on the game which forced their opponents back into their own half with a high intensity game.

All the good chances came in the Desert Foxes way in the second half but Sierra Leone goalie Mohamed Kamara was in a dazzling form and produced a scintillating display against the defending champions.

Tge shot stopper was called into action several times in the match and was up to the task on all ocations as he kept a clean sheet against the Algerians.

Said Benrahma, Sofiane Feghouli, Ramy Bensebaini, Riyad Mahrez, Yacine Brahimi all came close to scoring but failed to find the back of the net as it ended 0-0.