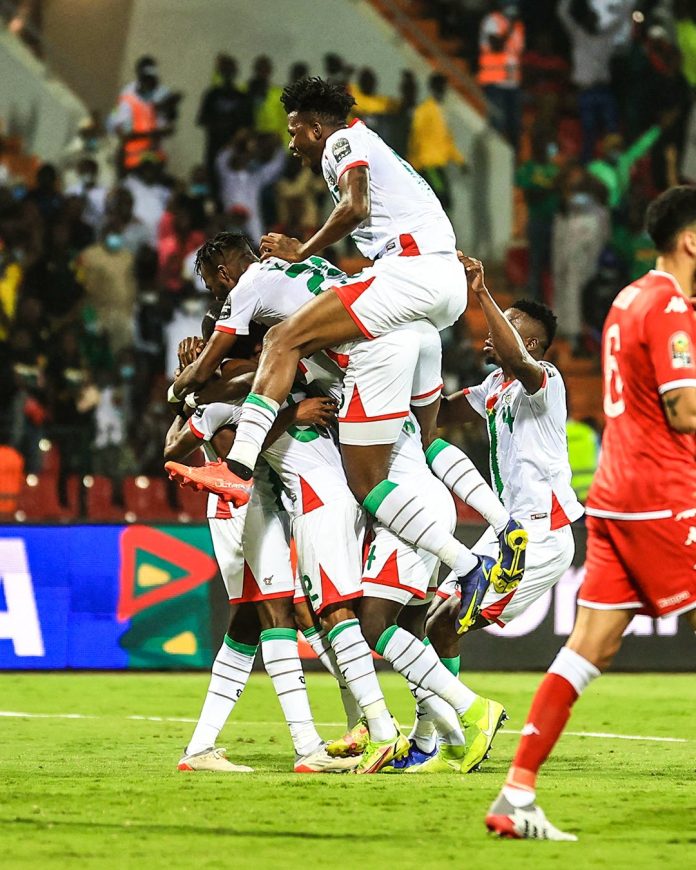 The Carthage Eagles of Tunisia have been booted out of the 33rd CAF Africa Cup of Nations tournament in Cameroon after a narrow 1-0 defeat to the Stallions of Burkina Faso.

The West African country recorded their third quarter final win at the mundial over Tunisia after beating them in 1998 and 2017 before today’s encounter.

Referee Joshua Bondo ended the quarter-final tie between Burkina and Tunisia roughly 30 seconds early as the Stallions secured their progression into the semi-finals of the Africa Cup of Nations tournament in Cameroon.

Teenage attacker Dango Ouattara who plays for Lorient FC in France scored the only goal of the game before being sent off later in the in the second half as Burkina Faso surprised Tunisia to progress to the next round.

Ouattara did brilliantly to latch onto midfield-gem Blati Toure’s through-ball as he held off two defenders and cut inside before firing past the helpless Bechir Ben Said inside the goal area with his weaker left foot.

However, he was then sent off in the 82nd minute for an elbow on Ali Maaloul with eight minutes remaining on the clock.

Ten-men Burkina Faso did fell to withstand Tunisia’s attacking threat in the final 10 minutes of the fixture, with Kamou Malo’s side making it to added-time as they were set to complete a famous victory over the North Africans who kicked tournament favourite, Nigeria out at the group.

Despite this, the referee blew his whistle to signal the end of the game around 30 seconds early. However, he wasn’t met with much opposition from Tunisia’s players.

This comes after Tunisia’s group stage match against Mali was marred by controversy after the referee Janny Sikazwe from Zambia blew the whistle 10 seconds early.

The West African side, Burkina Faso, who have never won the tournament – will now meet the winner of Sunday’s game between Senegal and Equatorial Guinea for a place in the final.

But they will be without Ouattara, the player who scored today’s winner after receiving suspended after his late dismissal – which came after Bondo’s second trip to the monitor for a video assistant referee check in quick succession.

Just minus earlier, Mondher Kebaier’s side were denied a penalty as Soumaila Ouattara caught Wahbi Khazri with a rash tackle in the penalty area after initially winning the ball.

This is the fourth time Burkina Faso are reaching the semi-final of the African Cup of Nations tournament but are yet to win the prestigious trophy as they loss in their only final appearance to Nigeria in 2013 in South Africa.

‘I was kicked in the groin’ – Citi FM’s Caleb Kudah