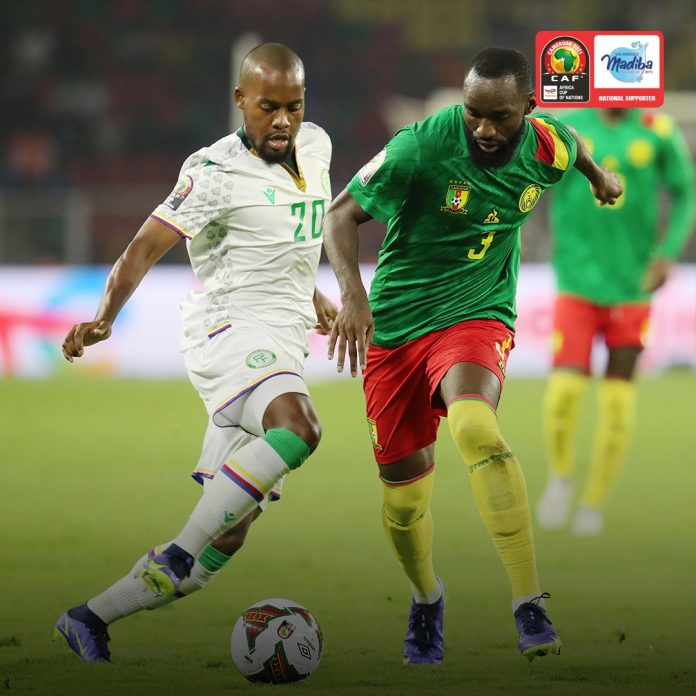 Indomitable Lions of Cameroon beat 10-man Coelacanths of Comoros on Monday evening in the Africa Cup of Nations tournament round of 16 game in Yaounde.

The AFCON first-timers crushed out of the 33rd CAF Africa Cup of Nations tournament in Cameroon in a hard way after being hit very badly by Covid-19 at their camp.

Just five minutes into the game, Nadjim Abdou was sent off following a VAR review after a bad foul on Michael Ngadeu-Ngadjui.

Makeshift goalkeeper, Chaker Alhadhur made some good saves in the first quarter of the match.

After 30 minutes played in the match, Toko Karl Ekambi connected with Vincent Aboubakar’s pass into the bottom left corner to give Cameroon a first half lead.

Cameroon turned on the screws on the minnows and pushed them back into their own half.

The makeshift goalkeeper made a fantastic double save to deny both of Ekambi and Aboubakar in the space of a second to keep the score at 1-0.

The tournament’s top scorer, Vincent Aboubakar added to his tally on the 70th minute with his sixth goal of the competition to make it 2-0.

Nine minutes to the end of the match, Youssouf M’Changama scored a brilliant free-kick from a long distance with a beautiful strike to halve the deficit on the 80th minute mark.

As they were on the attack at the very end of the three minutes additional time period, the center referee blew his whistle to bring the game to a close.

Cameroon are through to the quarter-final stage and will come up against Gabon for a place in the semi-final.

Twelve players of the minnows missed the game including their two goalkeepers and with the other injured which required an outfield player to play in goal as a goalkeeper for the match.

The debutants have their all but had to succumb to the five-time afcon to bow out of the competition with their heads held high.

Ghana can learn lessons from the US election – Mahama