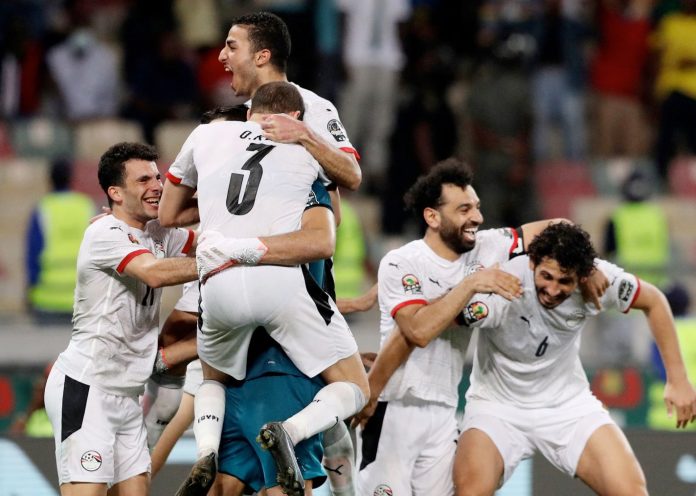 The Pharaoh’s of Egypt defeated the Elephants of Ivory coast 5-4 on penalties after a pulsating 0-0 draw in their Africa Cup of Nations round of 16 clash at the Japoma Stadium in Douala on Wednesday evening.

Even 120 minutes of football could not separate the two high-class sides, though there was no lack of scoring chances at either end, with the goalkeepers regularly called into action and bailing their side out on countless occasions.

At the end of the entertaining and end-to-end game, the Pharaohs held their nerve better in the penalty shootout, sending the Elephants crashing on their knees and kicking them out of the 33rd CAF Africa Cup of Nations tournament in Cameroon and setting up a quarterfinal showdown with Morocco in Yaounde on Sunday, 30 January.

Ivory Coast made the early running, with Franck Kessie driving a low shot just wide in the third minute. The West Africans looked to press high up the field and deny the Egyptians space and time on the ball.

The Pharaohs, though, gradually gained a foothold in the game and very nearly claimed the lead on 17 minutes, with Omar Marmoush letting fly with a long-range shot which had the beating of goalkeeper Badra Ali Sangare but crashed back off the crossbar.

Four minutes later Mohamed Salah had his first sight of goal, getting away a snap shot from the edge of the box which required a sharp save from Sangare.

On the half-hour mark Ivory Coast suffered a major blow when key midfielder Franck Kessie limped off with injury – Serey Die took his place in the engine room.

Egypt threatened in attack again on 36 minutes, with Salah teeing up Mostafa Mohamed for a low shot which was turned away at the near post by Sangare.

The other Sangare on the pitch, midfielder Ibrahim, then looked to break the deadlock at the other end on 39 minutes with an acrobatic volley from inside the penalty area, but Egypt goalkeeper Mohamed El Shenawy turned the effort away for his first major involvement of the match.

El Shenawy made another key stop on the cusp of halftime, keeping out an awkward volley from Sebastien Haller to see the game locked 0-0 heading into the interval.

The Pharaohs started the second stanza on the front foot, threatening through Amr El Solia (who shot over after great set-up play from Salah) and Mohamed Elneny, who saw a shot deflected off Simon Deli and well saved by Sangare.

Mohamed Salah held his nerve as Egypt progressed into the last eight of the Africa Cup of Nations after a penalty shoot-out win over the Ivory Coast in their round-of 16 tie.

The two sides could not be separated after 120 minutes of football and were forced to settle the score via a nervy penalty shootout that broke Ivorian hearts.

Salah could be seen rallying his teammates and urging for calm before his side stepped up to take on their counterparts from 12-yards.

Egypt’s shot-stopper Mohamed Abou Gabal, more commonly known as Gabaski, was one of his side’s substitutions after first-choice ‘keeper Mohammed El Shenawy was forced to withdraw from the action early with injury.

Eric Bailly missed the decisive spot-kick in the penalty shootout as Ivory Coast’s Africa Cup of Nations journey ended at the hands of Egypt.

As a result, former Manchester United assistant manager Carlos Quieroz will begin preparations for his side’s clash with Morocco in the quarter-final on January 30.

Bailly made his mark on the game in just nine minutes after he was booked for a wild swipe as the Egyptians posed a threat on the break and saw his penalty miss prove to be crucial as they were beaten 5-4.

He passed a late fitness test after a head injury forced him out of the group decider against Algeria but was forced to wear a protective head guard.

Bailly stepped up to take the third spot-kick but saw the Egyptian goalkeeper guess the right way as Mohamed Salah sealed the win.

The 27-year-old was solid in defence making a number of interceptions, tackles and winning headers but in one instance in the dying embers of the game, he pulled up after making a headed clearance and winced in pain.

Egypt wwill face fellow north Africa side, the Atlas Lions of Morocco in a North Africa derby on Sunday in the quarter-final of the African Cup of Nations tournament in Cameroon.