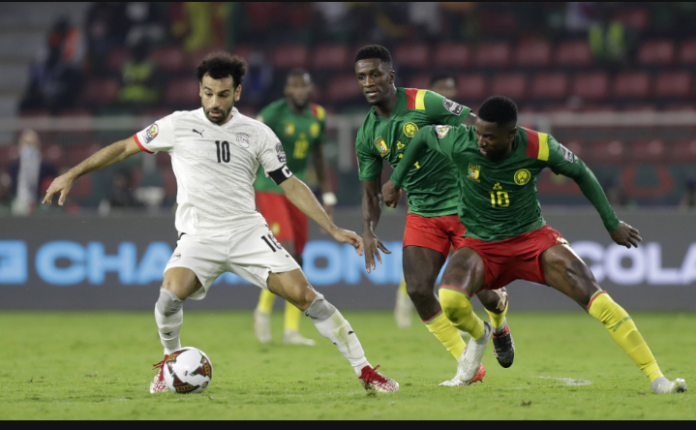 The Indomitable Lions of Cameroon could not roar and had to bowed to the Pharaohs of Egypt on penalties after a pulsating 0-0 draw in Olembe on Thursday evening.

The game game was played in a high intensity and was keenly contested by the two most glamorous country’s in the history of Africa Cup of Nations tournament.

Cameroon were the better side in the first half but could not create clear opportunities enough to break the Egyptian resolve at the back.

Egypt, as expected came into the game after the break and gave the hosts a good game with some few openings without any glaring opportunities in front of goal.

Liverpool star Mohamed Salah nearly pounced on a lose ball in the second half but AFC Ajax Amsterdam goalie, Andre Onana came to the team’s rescue to prevent the captain of the Pharaohs from scoring.

Neither side could break the deadlock despite coming close in 90 minutes of normal time before ending extra time with a goalless stalemate.

Cameroon had dominated for spells throughout the game but Egypt were far the superior side from the spot as the Lions missed three to see the Pharaohs book their spot in the final.

Cameroon missed three spot kicks during the shootout as captain Vincent Aboubakar was the only player to convert from 12-yards and Egypt scored all their three spot kick to win 3-1 to book a place in the final.

Egypt last played in the final in 2017 but were beaten by the Indomitable Lions.

Egypt will face Senegal in the final on Sunday as two friends, Mohamed Salah and Sadio Mane come face-to-face for a chance to win a silverware for their native country.