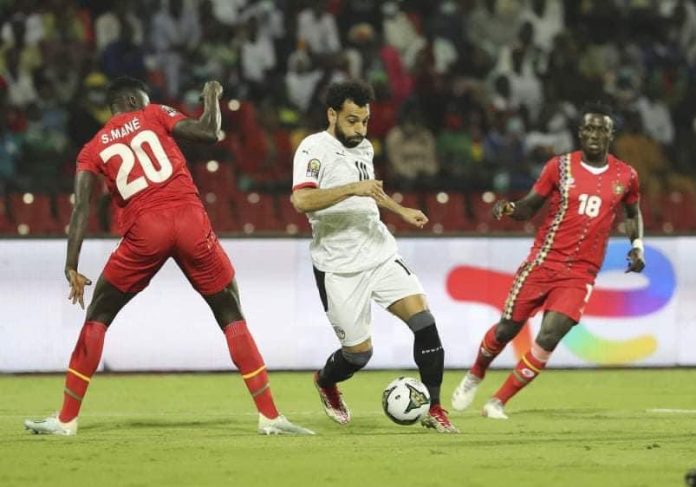 Liverpool FC star Mohammed Salah secured the Pharaoh’s of Egypt first win of the ongoing Africa Cup of Nations tournament against Guinea Bissau with the help of Video Assistant (VAR).

The Guineans were surprisingly denied what seemed a legitimate goal in their 1-0 defeat to the seven-time Africa Cup of Nations winners.

Guinea-Bissau played incredibly well against the Africa powerhouse and was a threat to the Egyptians any time they searched forward in the first half.

Egypt hit the upright twice in the first half but couldn’t find the back of the net.

The first half ended goalless simply because of the inability of the Guineans to utilize their chances in the end-to-end encounter of the match.

In the second half of the match, Egypt came into the game and started creating few chances as they hit the upright with a decent chance.

On the 69th minute mark of the match, Mohammed Salah scored on the volley as his shot went underneath of the Guinea Bissau goalkeeper to make it 1-0.

The Red and Yellows after falling behind made changes in personnel and started dominating the game once again but poor finishing was their biggest enemy on the day.

Egypt hit the upright again after numerous opportunities wasted by their opponents who were less purposeful upfront.

Mama Balde scored a magnificent and a scorcher for the Guineans late in the match but the Video Assistant Referee (VAR) surprisingly disallowed the goal that seemed legitimate goal.

Egypt were left off the hook as the VAR saved their blushes to secure their first win of the competition.

Lesson #1 for Akonnor: Be Seen, Not Heard

‘You have to change your wig’ – CJ to Akoto Ampaw