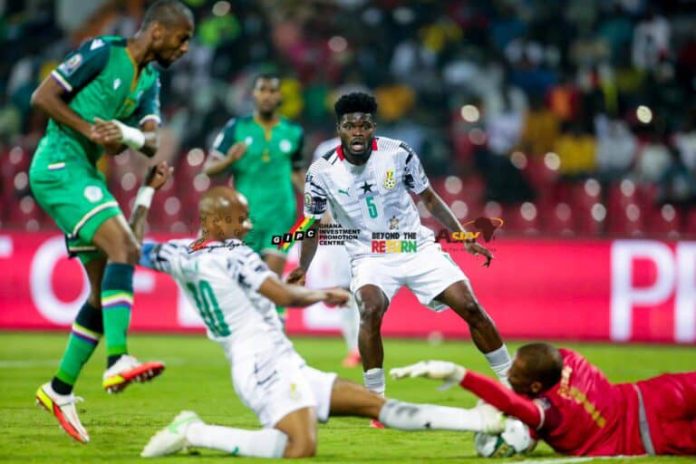 Black Stars bowed out of the 33rd CAF Africa Cup of Nations tournament at the group stage following a shocking defeat to Comoros on Tuesday night in Garoua.

Kamaldeen Sulemana unleashed a pile driver from long range but Comoros goalkeeper dealt with it as he parried the ball away from danger.

On the 25th minute mark Sulemana’s short was spilled by the goalkeeper and Andre Ayew’s attempt to connect with the rebound was was saved by the goalie.

Unfortunately, the referee after watching the VAR strangely showed the Ghana captain the exit door as the Black Stars were reduced 10 men.

Ghana begun playing better and started making incursions but the substitute goalkeeper, Ali Ahamada who replaced the injured Salim Ben Boina produced wonderful saves to deny Ghana a way back into the game.

Ahmed Mogni scored the second goal for Comoros in the 64th minute mark to make it 2-0 after another poor defending from the Stars.

After 77 minutes on the clock, Alexander Djiku reacted quickly and scored the equalizer for Ghana to make it 2-2.

Ghana pushed for the third goal but Comoros scored on the counter five minutes to the end of the match through Mogni and broke the hearts of Ghanaians.

The game ended 3-2 Comoros as Ghana finished last in their group.

Ghana are out of the competition as they finished last in the group with just one point.