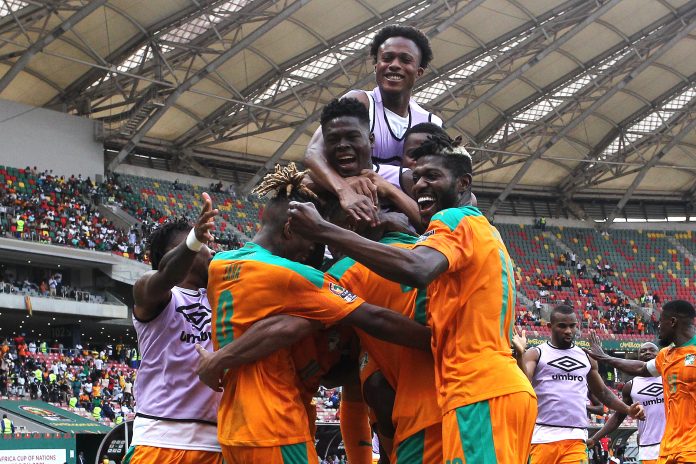 The Elephants of La Côte D’Ivoire walked majestically over the Foxes of Algeria in their last group E clash in the ongoing Africa Cup of Nations tournament in Cameroon.

The 2015 Champions dispatched the defending African Cup Champions with ease to top their group with seven points after two wins and a draw.

After the scare earlier on in the match, Ivory Coast upped their game as they woke up from their sleep and begun to play with real intensity and power.

After 22 minutes of action, Arsenal star Nicolas Pepe received a pass on the edge of the box and weaved his way through the Algerian defense before laying back a beautiful pass AC Milan midfielder Franck Kessie who finished off the move brilliantly with his weaker left-foot to make it 1-0 to the Ivorians.

Few minutes later, Pépé took a ball on the edge of the box but this time decided to go for glory but his left-footed strike was grabbed by the Algerian goalkeeper, Rais M’Bolhi.

Six minutes away from the half time whistle, Pépé was fouled on the right side of attack and the resulting free-kick was swiftly delivered by Serge Aurier into the box as Ibrahim Sangare headed home the second goal to put the Elephants 2-0 up at half time.

Nine minutes back from the break, Pépé was unleashed on the right side of attack by Ajax Amsterdam striker Sebastian Haller and the Arsenal man went ahead to curl a sumptuous strike into the bottom left corner to make 3-0.

On the hour mark, Simon Deli brought Mohamed Youcef Belaili down in the box as the Foxes were awarded a spot kick but captain Riyad Mahrez effort hit the upright.

The Ivorian coach made some changes in personnel as well as the Algerians but it was the Foxes coach substitution that yielded positive dividends as they took over possession and control of the match.

With 17 minutes left on the clock, Sofiane Bendebka reduced the deficit to two for the Champions after they caught the Ivorians defense unawares to head home from close.

Striker, Islam Slimani nearly reduced the deficit to one moments later but his effort was saved by Badri Ali Sangare.

Max Alain Gradel was nicely set up Pépé who was having a great time on the field but the deputy captain fluffed his lines with a tame effort.

The game became a balanced one in the last five minutes but no goal was scored as it ended 3-1 to the Elephants.

The defending champions bowed of the competition with one point and a single goal as they finished bottom in the group that had teams like Sierra Leone and Equatorial Guinea.