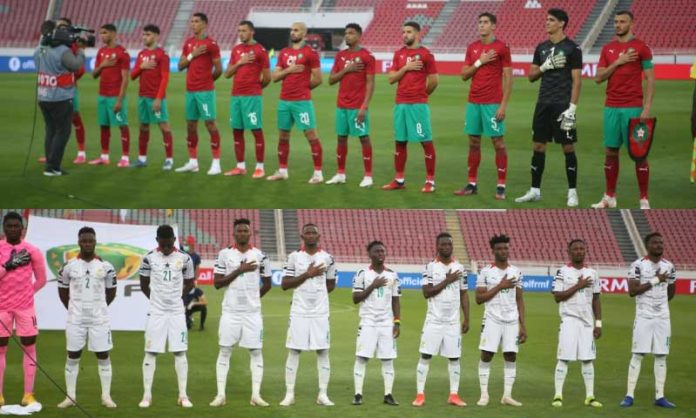 The Stars from West African are searching for their fifth a Africa Cup of Nations trophy which has eluded them for the past 40 years since winning it on Libya in 1982.

The two African heavyweights face off in the opening game of Group C at Omnisport Ahmadou Ahidjo Stadium in Yaounde at 4pm with both sides sighting their first win of the tournament.

Ghana are tipped to qualify alongside the Atlas Lions who are favored firmly by the bookmakers to qualify as group winners in a group of minors Comoros and Pierre Emerick Aubameyang’s stubborn Gabon team.

Ghana failed to reach the quarter finals (last 8)of the last edition when they lost on penalties to Tunisia in 2019 and are aiming to make amends this time around with a youthful and exuberant team.

Serbian tactician Milovan Rajevac who is no stranger to the African terrain; having led the Black Stars to the final of the competition in 2010 during his first stint where they lost narrowly to Egypt in the final have been tasked by the Ghana Football Association to lead the Stars once again in a major tournament after his first stint nearly worked magic.

With Ghana taking part in the tournament this year, this becomes the 23rd appearance in the Africa Cup of Nations tournament which is the most after Egypt (25) and Ivory Coast (24).

Morocco, Ghana’s opponents today on the other hand comes into the tournament as the second best ranked team in Africa and one of the genuine title according to football pundits and enthusiasts.

The Atlas Lions are yet to taste a defeat in regulation time across their last 27 matches since a 3-2 defeat to Gabon in November 2019 and are going into the tournament with high hopes.

They have managed 14 clean sheets in their last 16 matches, a run that includes a 1-0 win over Ghana in the summer of 2021 when the two teams played in a friendly match in Morocco.

This will be the 18th time the Atlas Lions will be participating in the Afcon tournament with their only title success dating back to 1976 were a losing finalist in 2004, losing 2-1 against hosts Tunisia. 2004 was also the last time they made it past the quarter-finals and have been to only two Africa Cup of Nations finals in their history.

Ghana and Morocco have met three times previously at the AFCON Tournament with all being in the group stages as both teams boast of one win each and one draw.

WHERE TO WATCH YOUR AFCON 2021