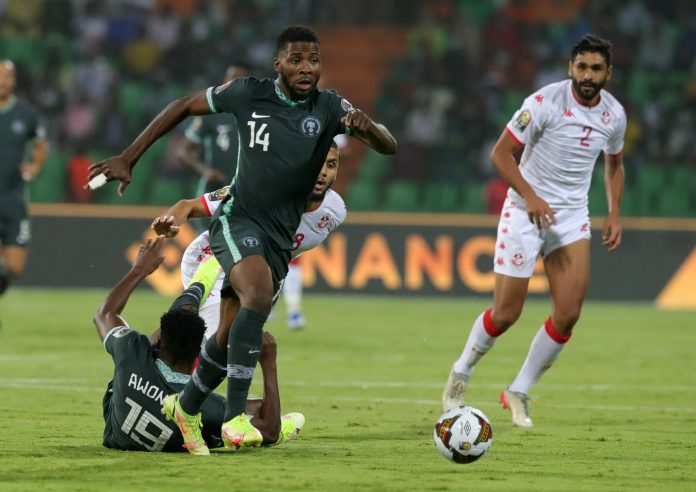 Tunisia beat Nigeria 1-0 in the round of 16 clash in the ongoing Africa Cup of Nations tournament in Cameroon on Sunday evening in Garoua.

The Carthage Eagles reigned superior in the battle of the Eagles to send the three-time AFCON champions home with a hard earned narrow victory.

The Super Eagles of Nigeria were the favourite to advance into the quarter-final stage following their exploits in the group stages becoming the only country to win all three matches.

Tunisia were performing below expectations going into the clash but secured a hard fought win over the Nigerians with the return of their key players.

Nigeria were the better side in the first half and created good openings but failed to utilize their chances as it ended goalless at the interval.

Just two into the second half, experienced attacker, Youssef Msakni picked up a long pass from Mohamed Drager on the left side of attack and manoeuvre his way through before unleashing a harmless shot to surprisingly beat Maduka Okoye in goal.

Augustine Eguavoen, the Super Eagles coach made two changes after going down by taking off Kelechi Iheanacho and Taiwo Awoniyi.

Peter Olayinka and Alex Iwobi was brought on as their replacements but the Everton man, Iwobi was red carded four minutes after his introduction.

Umar Sadiq who came on to take Samuel Chukwueze’s place was handed a golden opportunity to restore parity in the additional time period but sent his effort.

Tunisia, who finished third in their held onto their lead to beat Nigeria who were the only team with three wins in the group stage to send them back to Lagos.

Tunisia will play Burkina Faso in the quarter-final for a place in the semi-final.