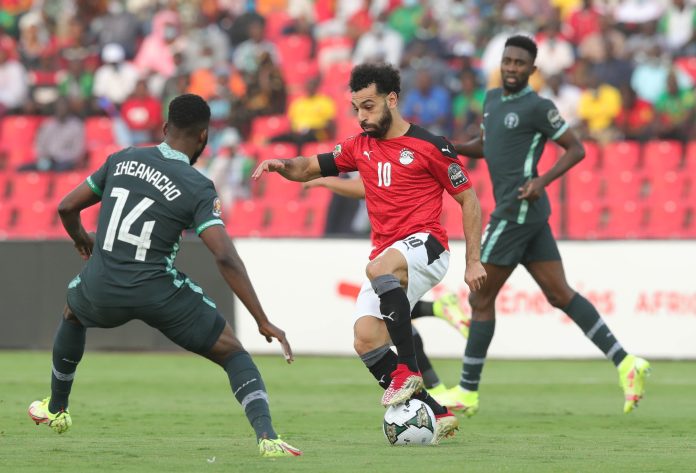 The Super Eagles of Nigeria fled high to secure a vital win in their Africa Cup of Nations group D opener against the Pharaoh’s of Egypt on Tuesday.

The Nigerians played with high intensity and purpose right from the blast of the referee’s whistle and made their intentions clear against the record AFCON Winners on the day.

FC Nantes winger, Moses Simon tormented the backline of the Egyptian defense and made life uncomfortable for the right and left backs throughout the match.

Taiwo Awoniyi of FC Union Berlin in Germany and Leicester City man Kelechi Iheanacho proved to be difficult to handle for the Egyptian center-backs.

On the half hour mark of the match, Simon sent in a sweet cross which was not properly dealt with the the Pharaoh’s defense before Joe Aribo’s header found Iheanacho just inside the box who controlled well and finished off brilliantly into the top right corner to make it 1-0 to Nigeria.

Five minutes later, Iheanacho set up Awoniyi inside the goal but the striker’s effort was tame and was easily grabbed by the Egyptian goalkeeper.

In the second half, Liverpool FC star, Mohammed Salah put through on goal but the attacker failed to connect well with the ball as Okoye in goal saved with ease.

Awoniyi hit the crossbar moments later as it remained 1-0 with ineanacho also missing a golden chance following a poor first touch inside the box.

Later in the game, Chidera Ejuke had a great chance to make it 2-0 on the counter but goalie El Shenawy produced a world class save to deny the youngster.

The game ended 1-0 to the Super Eagles who begun their quest for a fourth AFCON trophy with an impressive victory over the record champions before they take on Sudan in their next game as Egypt battle with Guinea Bissau for their first victory next Saturday.

Free SHS has saved me – Chief