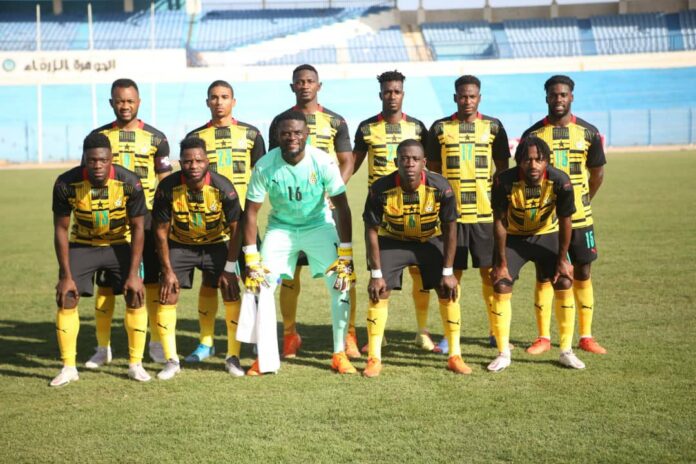 Ghana Black Stars succumbed to a shock 1-0 defeat in the 2021 AFCON Qualifiers in Omdurman against Sudan on Tuesday afternoon.

The spineless Black Stars 100 percent record in the group C of the Qualifiers for 2021 AFCON which will be held in Cameroon in 2022 due to the outbreak of coronavirus pandemic came to an end when the suffered a last minute loss after an uninspired showing.

Ghana’s best chances in the game fell to striker Caleb Ekuban in the first half but the Turkey-based forward failed on three occasions to make good use of the the opportunities that came his way.

After a goalless first 45 minutes, both teams scenced a chance to grab all three points at stake in the second 45 minutes of the boring encounter.

In the closing stages of the match, the hosts grabbed all three points to secure their second win of the qualifiers through a strike from Mohammed Abdul Rahman to hand Ghana its first defeat after four games.

The Black Stars will take on, South Africa and Sao Tome and Príncipe in their last two qualification matches in the next International break.

Ghana will take on South Africa and Sao Tome and Príncipe in their last two qualification matches next year in South Africa and Cape Coast respectively to hope to book a place for the next Africa Cup of Nations.

Black Stars despite their defeat to Sudan today still sit at the apex of the group on goals difference but same points as South Africa, 9,whiles Sudan follow with six points leaving Sao Tome and Príncipe without a point after four games.