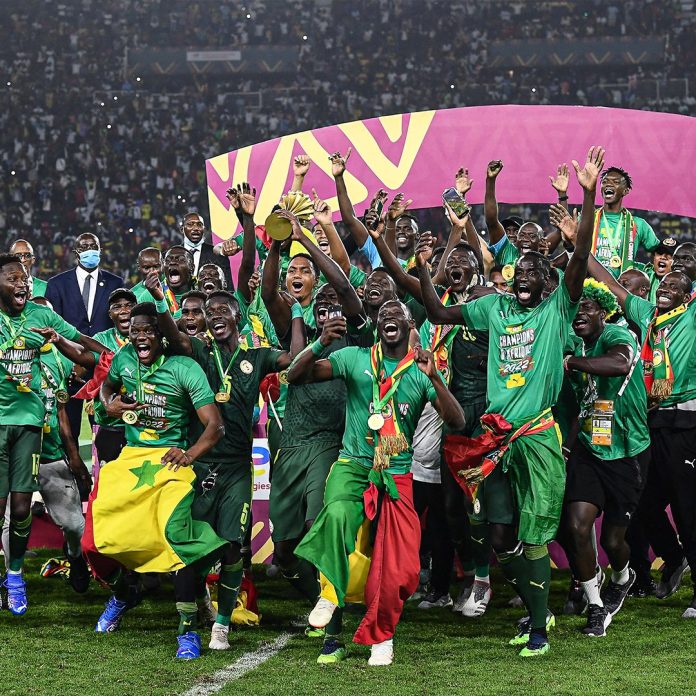 The Teranga Lions of Senegal broke the hearts of the Pharaohs of Egypt in the final of the 2021 Africa Cup of Nations tournament in Cameroon to lift their first ever AFCON trophy.

The Boys in Green and Yellows deserved to win on the account of events that took place at the Olembe Stadium on Sunday evening.

Senegal were quick out of the blocks and dictated the pace of the match with a commanding performance and display against a timid Egyptian team.

The Teranga Lions were awarded a clean penalty in the first half after just seven minutes but Liverpool star Sadio Mane’s effort was saved by Gabarski in the Egyptian goal.

The Lions roared throughout the opening exchanges of the match and kept probing in search of the first goal of the match.

Ismaila Sarr whipped in a pinpoint cross into the goal area but Mane was a bit late and failed to connect to the ball as he missed by a whisker for the ball to role out of play.

Mane, in few minutes later missed another good chance inside the box when he completely miscued the ball.

Egypt barely threatened the Senegalese goal in the first half except for Mohamed Salah’s wonderful effort that was saved by Chelsea goalkeeper Édouard Mendy.

Egypt produced just a flash of brilliance in a game which was overly dominated by the West African country.

Substitute, Aliu Dieng nearly broke the deadlock of the match but the Egyptian goalkeeper rose to the occasion again to deny the Teranga Lions.

After 120 minutes of the match, both teams could not be separated and had to be separated by the sudden death, penalty shootout.

The Egyptian then missed two spot kick with their second kick hitting the post with Mendy saving the fourth kick – Bounar Sarr of FC Bayern München missed his kick as well.

Then came the moment when Mane, who had missed from the spot earlier had the opportunity to right the wrong and perfectly slotted the ball into the back of the net to win the 2021 Africa Cup of Nations tournament hosted in Cameroon for Senegal who lift their first trophy ever.

Senegal deservedly beat the Egyptian 4-2 on penalty shootout to break the trophy drought after a slow start to the tournament.

40 Ghanaians deported from US; 12 from Saudi Arabia