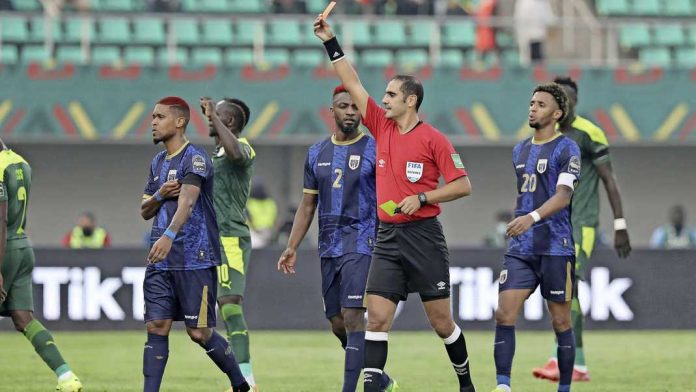 Senegel has joined the last eight at the Africa Cup of Nations tournament in Cameroon with a 2-0 win over the Islanders, Cape Verde.

The Blue Sharks were reduced to 10 men after they were shown two red cards after intervention by the VAR.

Senegal started the game on a blistering pace and hit the post within forty seconds via Sadio Mané and after that, the big VAR show started with two controversial send-offs.

Before halftime, Patrick Andrade was shown red for Cape Verde after he went over the ball with his foot, but did hit his opponent’s ankle full slightly resulting in the first sending off.

After the break, the VAR intervened again , when Mané collided hard with keeper Vozinha, but the Cape Verdian was sent off, reducing his team to 9-men.

Both suffered head injuries, but Vozinha was adjudged to have fouled the attacker, so the verdict was another red to the Blue Sharks.

Against nine men, Senegal then quickly made it 1-0 because Mané shot in from a corner.

The VAR also wanted to cancel this goal due to an alleged violation, but referee Lahlou Benbrahm from Algeria did not agree.

Senegal then failed to take full advantage of the match, giving the nine men Cape Verdian team a small chance to equalize, but this was not converted. In stoppage time, the 2-0 eventually fell through when Baba Djeng scored his first goal of the tournament to send Senegal through to the quarter-final.

They will face the winner of either Morocco or Malawi in the last eight.