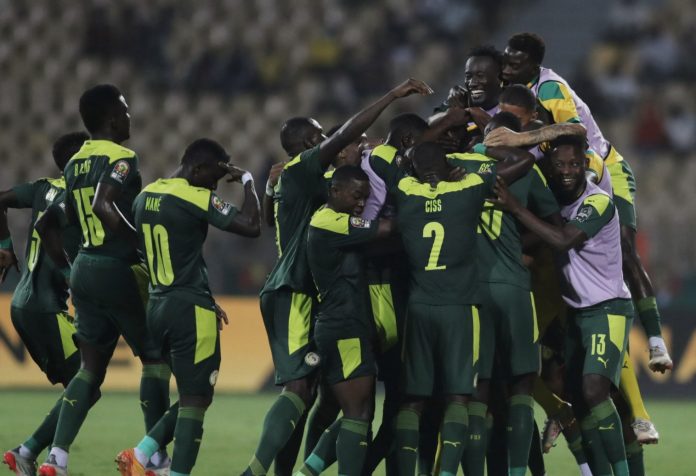 The Teranga Lions of Senegal broke the Stallions of Burkina Faso resolve in an entertaining Africa Cup of Nations semi-final clash on Wednesday evening.

Senegal handed Burkina a very heartbreaking defeat to book a place in the final of the 33rd CAF Africa Cup of Nations tournament in Cameroon.

The 2019 finalist will play a successive final at the tournament for the first time in the country’s football history.

Both teams played well in the first half but the game was a bit physical with a lot of hard tackles flying in from both sets of players on the field.

The highlight of the first was a terrible experience for Burkina Faso as their deputy captain and goalkeeper Hervé Koffi crushed with Crystal Palace player Cheikhou Kouyate and was substituted after colliding with the midfielder.

After the break, the game was quite balanced in the first 15 minutes but Senegal turned on the screws after the hour mark and started dominating the match and pushed their opponents into their own backyard.

Twenty minutes away from the full time whistle, former Dortmund defender, Abdou Diallo broke the deadlock of the match to put the Lions in the lead after the Stallions failed to clear their lines from a corner kick as he controlled Kalidou Koulibaly’s overhead kick to slot home the first goal on the 70th minute mark.

Six minutes later, PSG midfielder Iddrissa Gana Gueye connected from close range to make it 2-0 after Mane shrugged off Issoufou Dayo who tried to shield the ball out of play before setting up the diminutive midfielder to tap home his first goal of the tournament.

Undoubtedly the best midfielder of the tournament and in the game, Ibrahim Blati Toure improvised with a knee poking strike from just inside the box to half the deficit following a quick counter attack.

Just when the Stallions started getting the momentum and piling pressure on Senegal for the equalizer, Edmond Tapsoba’s control in the middle of the field hit goal scorer Toure who was lying on the pitch with the ball falling into the path of Ismaila Sarr who sent Sadio Mane through on goal and one-on-one with the second choice goalkeeper.

Mane kept his cool in front of goal and lobbed his effort over the goalkeeper to hit the nail on the coffin to send the Teranga Lions to their third final as they chase their first AFCON trophy.

Senegal will face the winner of Cameroon vs Egypt game in the final at the Olembe Stadium on Sunday evening.

Kumasi: Four NIA officials, one other arrested over registration malpractices