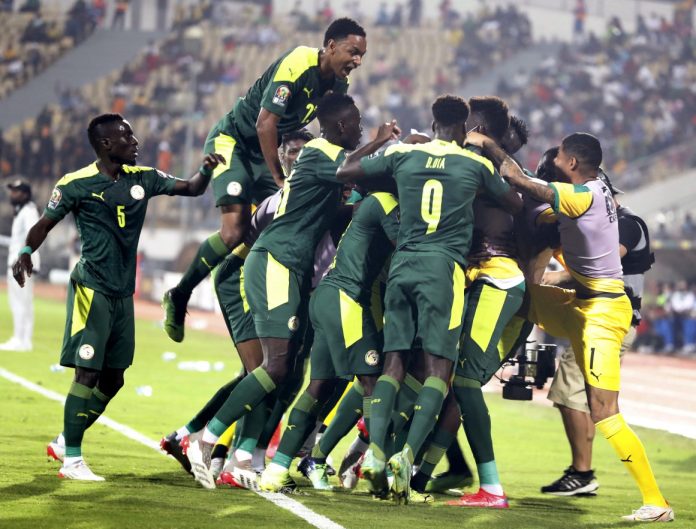 The Teranga Lions eased past the lightning Thunder to reach the semi-final of the 33rd CAF Africa Cup of Nations tournament in Cameroon.

Sadio Mane, Cheikhou Kouyate and Ismaila Sarr were all target for the 2019 finalist as they booked a place in the semi-final with a comfortable 3-1 win over the overachievers.

Famara Diedhiou broke the deadlock of the match to put the favourites in the lead on the 28th minutes mark after a nice setup by Mane.

After the break, the National Thunder side upped their game and pushed for the equalizer with some good football on display especially in the early stages of the second half.

Iban Salvador Edu thought he had won his team a penalty when his intelligent flick came off Senegal captain Kalidou Koulibaly’s hand but VAR was consulted as the decision was rescinded by the center referee to break the hearts of the Equatorial Guineans.

Moments later, captain Emelio Nsue sent a lovely pass into the path of Jannick Buyla Sam who poked the ball beyond the reach of Édouard Mendy to make it 1-1.

Aliu Cisse, the coach for Senegal responded and made three straight changes after conceding the equalizer – Kouyate, one of the substitutes wasted no time in announcing his presence in the game as he pounced on a lose ball inside the box to lob the ball over Jesus Ovono into the back of the net to restore his team’s lead three minutes after coming on.

It was a day for the subs as Sarr finished off a quick attack from the left side of attack when he was found inside the box by a beautiful pass from Saliou Cis to tap into the open goal to make it 3-1 with just 10 minutes left to play.

The Guineans tried coming back into the game but came short in their attempts to salvage the game late on.

Senegal, as predicted by many held their nerve to win the game on regulation time to set up semi-final clash with West African Brothers Burkina Faso who beat Tunisia on Saturday.