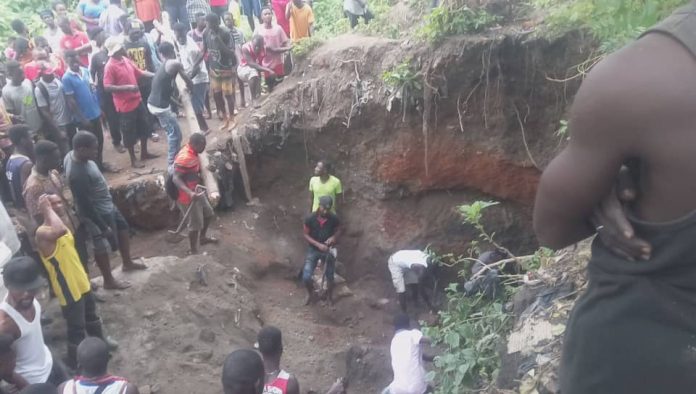 The body of one of the two persons who got trapped in a collapsed mining pit at Bronikrom in Akrokeri, in the Ashanti Region, has been retrieved.

Police have identified the deceased as 35-year-old Stephen Abu aka Nkasei.

His body was retrieved by a rescue team deployed at the mining site. He was pronounced dead at the scene, police confirmed to DailyMailGH Thursday.

Police say his colleague, identified only as Ahmed, 22, who survived the accident is yet to be captured after he reportedly fled the hospital to avoid arrest.

The two had gone to an illegal mining site to prospect for gold ores when their mining pit, which is closed to a toilet facility located at the center of the community, caved in.

The search party had challenges in the operation as residents who besieged the scene stampeded the process.

It took nearly seven hours to complete the rescue mission.

“For now one person has been confirmed dead and he was retrieved from the pit. We had officials from NADMO and Anglogold Ashanti coming to assist us in that regard…It took them over seven hours of digging before getting to where the body was… So the body of deceased has been deposited at the morgue”.

“The one who survived had earlier gone to the Assemblyman to report the incident to him. When he mentioned to the assembly member that they went to the pit and they were trapped, he had injuries, he was asked to go to the hospital. He left the hospital unceremoniously,” he added.

ASP Godwin Ahianyo said the police was searching for Ahmed to help in investigations.

He said their preliminary information based on reports from experts from Anglogold Ashanti and NADMO shows that the two could be the ones in the pit when the incident occurred.

“We currently don’t know where he is so we are searching for him. He is the only person that we know [is alive],” he said.

“NADMO officials and Anglogold officials told us that, per what they’ve done, there are no more bodies so we should cover the pit with the sand that was removed,” he said.

Earlier reports said at least seven people were trapped in the collapsed pit but the police said those numbers are only rumours.

A number of deaths have been recorded in the past years as illegal miners intensify their operations.

Past and present administrations had launched a major crackdown to curb the menace.

On November 13, 2009 a collapse occurred in an illegal, privately owned mine in Dompoase, in the Ashanti Region of Ghana.

At least 18 workers were killed, including 13 women, who worked as porters for the miners. Officials described the disaster as the worst mine collapse in Ghanaian history.