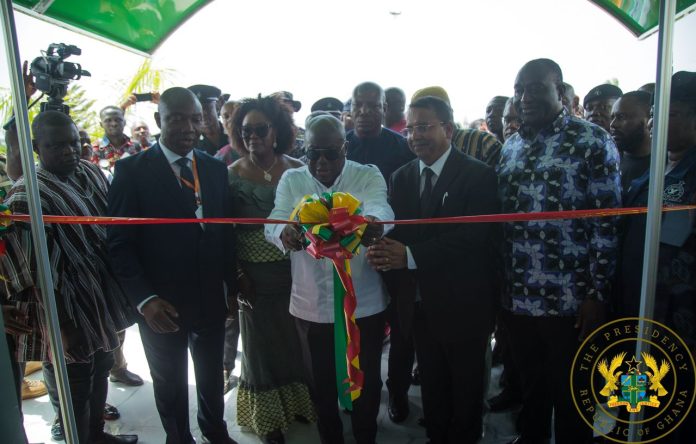 Speaking at the commissioning, President Akufo-Addo stated that the ceremony “is in further fulfilment of the promise by Government, in partnership with the private sector, to set up at least one medium to large scale enterprise in every district of Ghana.”

According to the President “Whilst previous attempts at rural economic revitalisation in Ghana have focused mainly on the provision of physical infrastructural facilities, the One-District-One-Factory Programme focuses on the promotion of commercially viable business ventures, to generate sustainable and accelerated economic development for rural communities.”

He stated that Atlantic Lifesciences Ltd., with the support of Government in 2017, has established this new facility in the healthcare sector, engaged in the manufacture of vaccines, anti-snake serums, eye drops, inhalation anaesthesia products, syrups, tablets, and capsules, in Larkpleku, under the One District One Factory (1D1F) Programme.

“It is the one hundred and seventh (107th) factory completed and operating under the 1D1F initiative, out of the two hundred and seventy-eight (278) enterprises being established and rehabilitated across the country, and I congratulate the promoters and management of the company for taking advantage of this Programme,” he said.

President Akufo-Addo was happy to note that the Ministry of Trade and Industry, in collaboration with Ghana EXIM Bank and Standard Chartered Bank, has since 2017 supported this company to benefit from the 1D1F Programme.

Out of the total investment for the project, which is estimated at thirty-five million dollars (US$35 million), Ghana Exim Bank provided a credit facility to the tune of ten million dollars ($10 million) for the procurement of plant, equipment, and machinery.

This, according to the President, underscores the kind of support given by Government to the private sector to take advantage of economic opportunities in the country.

President Akufo-Addo was pleased to learn that “this new factory is generating some three hundred and eighty (380) direct jobs, and, when fully operational, will generate additional direct employment for some four hundred (400) workers. In addition, the facility is expected to create a total of two thousand, five hundred (2,500) indirect jobs.”

He commended the collaborative work, between the Ministry of Trade and Industry, Ministry of Health, Ghana Exim Bank, Standard Chartered Bank, Food and Drugs Authority, Traditional Authorities, and foreign partners of the company, for providing the requisite support towards the establishment of the state-of-the-art manufacturing facility.

GYAN IS BACK: The Ghana Premier League, 17 Years Later