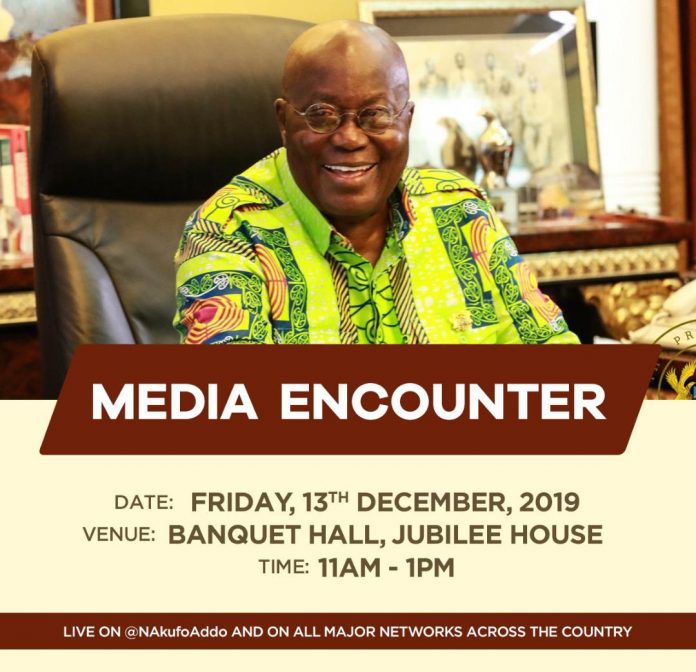 Ghana’s President Nana Akufo-Addo will on Friday, December 13, 2019, meet members of the press at the Jubilee House, the Presidency has announced.

The encounter is expected to afford invited journalists the opportunity to ask the President some critical questions on topical issues in the country as far as his three-year-old administration is concerned.

This event is scheduled for 11 am to 1 pm, officials at the Presidency said on Thursday.

The Presidency said it was a crucial approach to engage Ghanaians and take criticisms to shape the government’s flagship programmes and policies.

It is also not the first of its kind.

This is the fourth time the President is opening himself up for questioning having done same in July 2017 and January 2018.

Many Ghanaians, especially the Civil Society Groups heavily criticised the last Presidential encounter which was held at the Jubilee House.

Media Foundation of West Africa (MFWA) opined that the President’s meeting with journalists was the worst presidential media encounter ever.

Its President, Sulemana Braimah also observed that President Akufo-Addo “clearly wasted too much time” on some of the questions that demanded straightforward answers.

One major point of concern for him was that the President appeared to hog all the time from the media members present for a speech which Mr. Braimah described as “a rehearsal for his State of the Nation Address.”