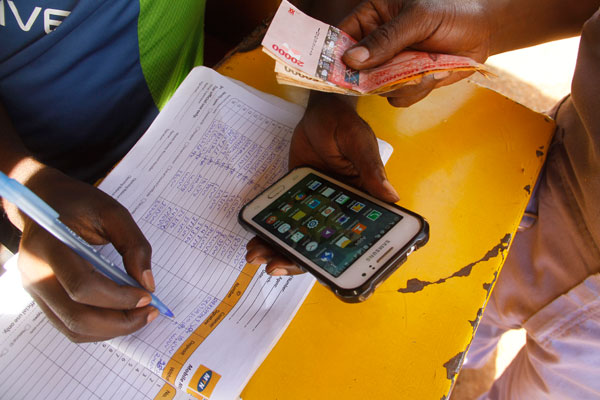 At first, you would receive an unexpected text message notifying you that an amount of money had been credited to your mobile-money account. Almost immediately after that, a telephone call would come to you from a purported sender of the ‘ghost money’. The caller would open the telephone conversation with greetings.

Already, he had extracted your name through an app or from the same source that might have made your telephone number known to him. But, in order to sound credible to you, he still would mention your name and ask if you were the bearer of the name.

If you said ‘yes’ to that question, he would identify himself by a name and would claim he was talking to you from a particular remote location. He would further introduce himself as a mobile-money vendor and again would ask if you had received a message about some money having been credited to your mobile-money account. If he got a yes-answer from you, he would tell you it was a mistaken transfer and would mount a solemn plea on you for the ‘ghost money’ to be sent back to him.

Simple as this fraud may look to sniff out on the face of it, some, for some reasons, had fallen into it deep and flat. Those who proved smarter than the fraudsters, by refusing to fall for the scam, received instant threats that turned out also so quickly to be empty. Angry for missing their illicit targets, the scammers warned that the mobile-money accounts of the ‘ghost money’ receivers would be blocked for accepting money not meant for them. And they often fulfilled those empty threats by ‘blocking’ the accounts and announcing to you through SMS that the ‘blocking’ had been carried out. Despite the bragging and the blocking, your access to your account was still exclusively intact.

Generally, these fraudulent ‘ghost money’ senders are men and they speak very politely until you unmask them in the line of dubious duty. Another thing that can help you pick them out without much effort is the grammar that often comes with the trickery text messages. No telecommunication company, no matter how poor its network service already may have been, would want to compound the trouble its clients already are going through by also forwarding to them the type of grammar the pitiless predators regularly send to their prospective preys.

With time, this trick became so widely known it lost its sway along the way. The more the ‘ghost money’ operators took aim at cellphone users to syphon all the savings they had got in their mobile accounts, the more the now-informed targets parried the tricky phone conversations. But they would not take no for an answer. They have updated the familiar trajectory. That is what I want to make known to those whose might not have heard about the new trick.

Now, the scammers have moved a step further into linking up their targets with some faceless collaborators who claim to be officials of a telecommunication company.

A text pops up on your phone, indicating a certain amount of money has been sent to your account. The ghost-money sender calls you, telling you the ‘money’ you have ‘received’ is a wrong transfer. This time, he does not ask you to refund the money; he informs you that, prior to calling you, he had notified the telecommunication company you are registered with about the mistaken transfer and had prompted the company to temporarily block your account.

Continuing, he tells you to not worry because the telecommunication firm, upon receipt of his complaint and before he was able to reach you on the phone, had refunded to him the same cash he wrongly transferred to your account. Then, he would add that a telephone call would come to you soon from some officials of the ghost telecom company who would work together with you on the telephone to undo the blocking of your account.

And ‘true’ to his word, somebody would call you in no time. The new caller sounds very formal and quite composed in his tone— as the genuine telecom customer-care personnel generally are. He introduces himself as a telecom staffer and tells you somebody lodged a complaint that he wrongly transferred some money to you. He states that the wrong transfer had occasioned the network service provider to freeze your mobile-money account. The caller goes further by telling you the company has reimbursed the money to the complainer and that, since that has been done, the company wants to free your account so you can regain access to it.

If you accommodate him further, he will draw closer by asking you to follow some instructions he is going to dictate to you to undo the blocking. He tells you to start by entering the familiar code mobile-money account holders do key in to access their accounts. If you cooperate with him beyond this point, he will lead you into selecting some options that will gradually bring you to a point where you will be required to disclose your Personal Identification Number (PIN) to the fake telecom official. Once you do this, you can be sure that you unconsciously have handed the key to your private savings box to heartless swindlers.

Some Questions to Ask

Again, if a so-called telecom company could block your account without your assistance after you have received a wrong money transfer, why would the same company need your assistance to unblock the same account after it has refunded the ghost money to the ghost sender?

A retired health worker told me how he escaped narrowly from these fraudsters. He said he ignorantly had tried to send back an amount of money a trickster claimed to have wrongly transferred to him but he (the pharmacist) could not only because he realised that the real money in his account was even not up to the ghost amount the fraudster claimed he had mistakenly sent.

You will find below on an audio tape of aninterestingtelephone conversation I had with two of such fraudsters. People are falling prey to these pitiless predators everywhere. Everybody is a target. If you lose guard, the stalking sharks will, with just a single swipe, sweep your mobile-money account clean!