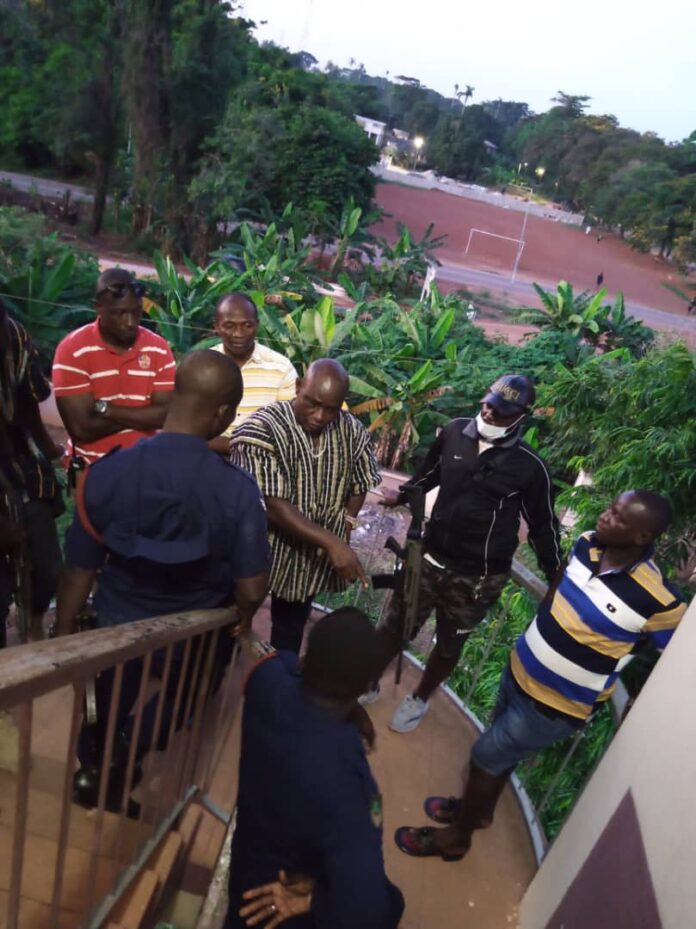 The acting National Security Coordinator, Major General Francis Adu Amanfo (Rtd), is fighting off claims by the former Ashanti Regional Security Liaison Officer that he was handcuffed by national security operatives who forced him out of office.

According to the top security chief, DCOP (Rtd) Opare Addo’s account does not represent the facts of the matter.

He further clarified his men who were deployed from Accra were rather handcuffed by the police who had been called by DCOP Opare to handle the matter.

He made a point that the tenure of DCOP Opare Addo has expired, but he has refused to vacate his post, adding that, his contract was not renewed as a result of “non-performance and criminality”.

“The bottom line of all of this is that, Opare Addo had a contract with National Security and for four years he was the regional liaison for the National Security. His term of the contract has expired. It was not renewed because of non-performance and his own criminal activities”.

“He had no locus to be in the office because a new officer had been appointed, and he should have handed over to the officer, and he says he won’t hand over. So that is why a team was sent from Accra to go and mitigate and facilitate the handing, and takeover process,” he added.

Major General Adu Amanfo (rtd) said a committee has been instituted to probe the “vicious” allegations raised by the embattled Regional Security Coordinator.

When asked for further clarity on his claims of criminality against DCOP Opare Addo, the acting National Security Coordinator said those issues are under investigation.

“I will say most of these things are vicious, and I say so because I am very experienced in the military. I have served 37 years, being an Ambassador to Liberia, Mali, so I have seen it all. Most of these allegations are vicious, so we need to investigate them before I can make any serious statement. These issues are being investigated.”

However, DCOP Ayensu Opare Addo has rejected assertions by General Francis Adu Amanfo (rtd) over his forceful removal from office.

He said his supervisor should not be taken seriously because of his lack of fact on the development.

“He [National Security Boss] is making those propositions, so he should come out with his findings. My allegations are not vicious. Forget about him, and I am not worried about him. I know the guys who came to my office. They are Delta Force members who I know them by face and names. He said I have been in office for years so clearly, he doesn’t know what he is saying”, he said on Eyewitness News on Tuesday.

However, when asked the specific question in response to claims that he was not handcuffed as he earlier narrated, DCOP Opare Addo replied saying; “leave him [Major General] alone. He wasn’t in my office”.

DCOP Ayensu Opare Addo (rtd) had recounted his ordeal at the hands of his attackers and questioned the reasonability of the treatment meted out to him.

LETTER TO AN OLD FRIEND: ‘Chloro’ for ‘Coro’