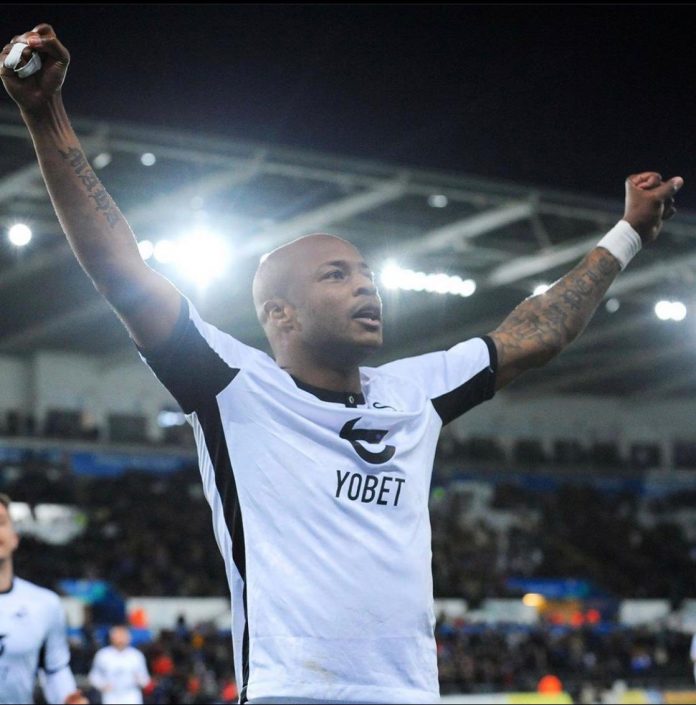 The Ghanaian is the club’s top scorer so far this season and Cooper could not hide his excitement and admiration for him.

Cooper had spoken of Ayew’s qualities following his excellent display against Blackburn in midweek, and he was a stand-out performer once more against the team from Teesside.

Speaking to the club’s website after the game about Ayew, the manager said: “I’ll keep saying it because it’s the truth. He’s been brilliant and
he’s a class act both on and off the pitch.”

According to the gaffer Ayew is a consistent performer and what makes him exceptional is his work ethics and attitude.

“First and foremost as a player, he delivers. His attitude and work ethic is right up there and he’s a brilliant personality off the pitch as well in terms of leading the way, helping with the younger players and long may it continue.”

On the other hand, the Swansea manager thinks the 29-year-old can excel in the higher leagues.

“We know Andre can play higher than this level. But I can only go off what I can see and that is a player who’s giving more than 100%, delivering, scoring.

Cooper again heaped praises on the Ghanaian for his performance in his team’s previous game against Blackburn Rovers.

“You think back to the performance against Blackburn and he’s sliding in tackles in the defensive third and creating counter-attacks himself.

Meanwhile, Cooper professed his enormous love for the Black Stars captain and acknowledged that the Ghanaian feels happy playing with all his heart for the Black and Whites.

“That tells me he’s really happy. I have a wonderful relationship with him. I like him a lot. I think he likes me a little bit as well!

Cooper expressed his gratitude for having Ayew at the club.

“For as long as he’s here playing, the better for the football club.