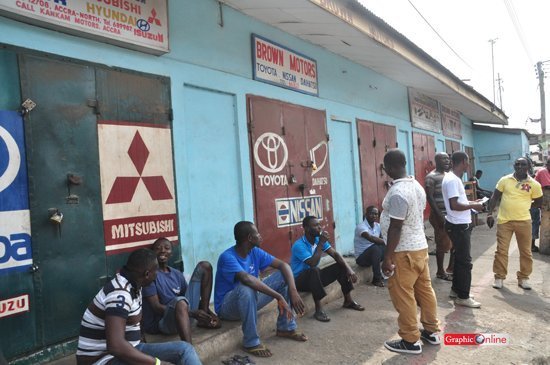 Ghanaian Traders at Opera Square in the capital, Accra have embarked on another operation to lock-up shops owned by foreigner.

They are accusing the foreigners of hiring land guards to re-open the shops which were most recently locked up on November 4 after two previous incidents.

According to them the government is to be blamed for all that.

“This is what we are doing now because the government is not helping since no matter what we do, they will just tell us that the guys [foreigners’ traders] should keep on working.”

“We have our market and we say they shouldn’t retail. They should sell wholesale,” another trader said as he quoted section 27 (1) of the GIPC Act in a Citi FM report.

The Act says a person who is not a citizen or an enterprise that is not wholly-owned by a citizen shall not invest or participate in the sale of goods or provision of services in a market, petty trading or hawking or selling of goods in a stall at any place.

However, the government has mostly opted for diplomacy in handling the tensions resulting from the non-enforcement of the law.

Ghanaian traders have not hidden their anger over the government’s lack of action which has resulted into instances of violence at Opera Square and other places like Suame Magazine in Kumasi.

The Police service has eventually calmed the Monday morning tensions by ensuring the shops were closed.

The Accra Regional Police Commander, DCOP Fred Adu Anim also noted that both the foreign traders and the Ghanaians were taking the law into their own hands.

“Two wrongs do not make a right and in order to avert any violence or breach of the peace, we had to come in and ensure that the Nigeria shops are reclosed in the interest of peace so the previous negotiations which are ongoing should continue.”

Migrate our accounts to banks for quick payment – CASLOC to...