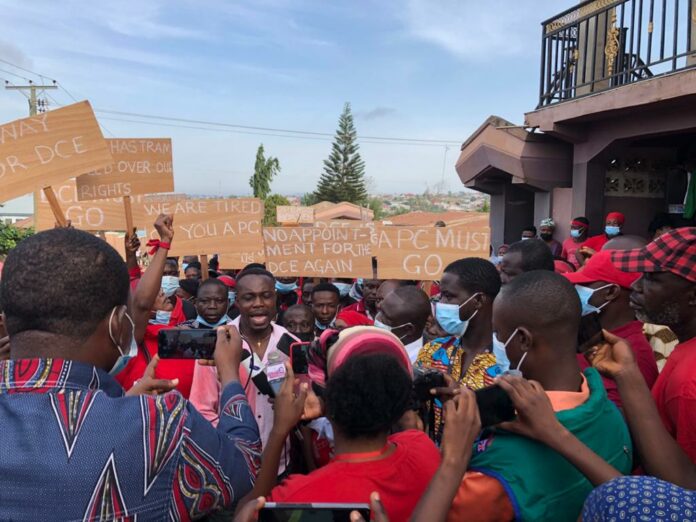 A massive campaign to remove the District Chief Executive (DCE) for the acting Afiagya Kwabre South from office is gaining momentum even before the President determines his fate.

Earlier this week, some residents on Wednesday staged a protest against a decision fuelled by some top politicians to renominate Christian Adu Poku, popularly called APC.

The aggrieved residents, most wearing red bands and masks, keeping distance from one another waved placards reading “APC must go”, “He is arrogant”, “No appointment for the DCE again”, among others.

Citing the Kwabre Development Fund, an initiative aimed at using taxes imposed on the operation of quarries to develop the area, among others, the residents say little has been done to improve their livelihoods.

He has also been accused of displaying arrogance and disrespect to traditional authorities and party a situation they say could affect the fortunes of the governing New Patriotic Party (NPP) ahead of the 2024 elections.

The protesters, drawn from Krobo, Hemang, Ntiri Buoho, and other adjoining communities, later converged after marching through the streets of Afrancho to address the media.

“We are tired of him”, a resident who gave his name as Kwadwo Nkrumah said. “Our plights have worsened because our leader APC is not innovative. He cannot bring development to our community and we are calling on the President to do the needful”.

Another resident and a sympathizer of the ruling government said: “The insecurity here is alarming. It is time the President acted. Such a leader will jeopardize the NPP’s votes in 2024 and we will kick against that. Nana Addo must act now!”

APC is the first to head the Assembly carved out from the Afigya Kwabre South in 2017. But the residents have vowed to embark on series of protests to get him out of office.

The nomination of new Metropolitan Municipal and District Chief Executives appears to be unsettling the grassroots of the NPP.

As calls mount on the President to remove incumbent Chief Executives many still believe they should serve another term.