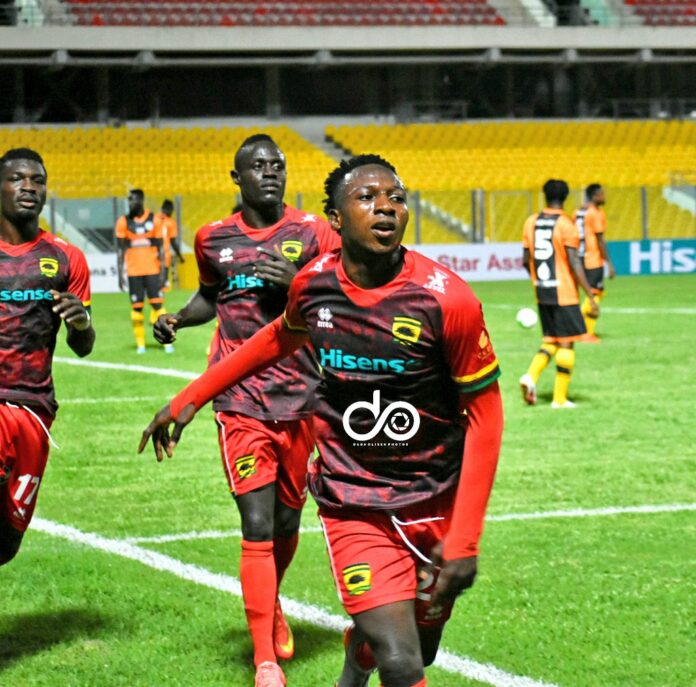 Asante Kotoko secured their first win of the season after defeating Legon Cities by a lone goal at the Accra Sports Stadium on Friday night.

The Red and Whites took an early lead in the game when former Asokwa Deportivo striker, Osman Ibrahim, latched onto a loose ball in the box to put the hosts 1-0 up following a pinpoint cross from Patrick Asmah after 11 minutes.

Midfielder Kwame Adom Frimpong and goalscorer Ibrahim Osman were both subbed off in the first half due to injuries and were replaced by Sulley Muniru and Evans Adomako respectively.

Legon Cities striker, David Ocloo, had numerous chances to restore parity for the Royals but fluffed his lines and failed to make amends for the Money Bags.

Experienced forward, Asamoah Gyan, was brought on in the 60th minute to replace Ocloo but his presence could not bring a goal for Cities.

Asante Kotoko for the first time this season held onto their early lead and won the game by a lone goal to secure their first win of the season in three games after drawing their opening two games by a 1-1 stalemate.

Legon Cities on the other hand remain winless in five games and have conceded five goals, suffering two defeats and picking three draws in the process.

I’m excited and ready for the challenge ahead – Kotoko coach...