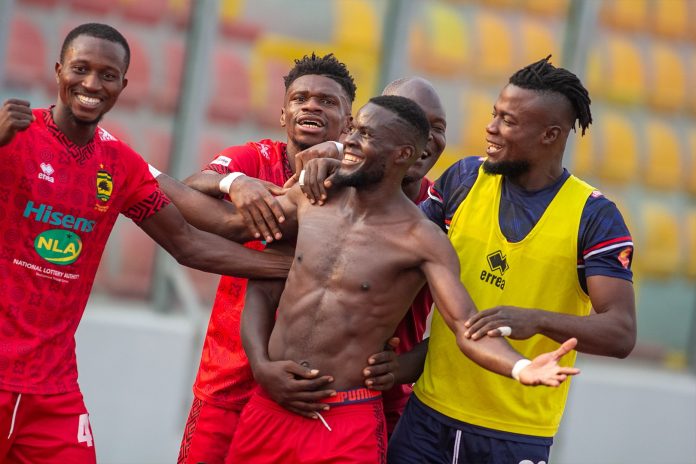 Kotoko started the game on a blistering pace and started dominating after 10 minutes of action with some beautiful football on display.

On the 18th minute mark, Afoakwa winked a teasing cross from the edge of the box, but there was nobody to connect as it rolls to touch.

The 45 minutes of the first half ended in goalless with Medeama goalkeeper coming to his team’s rescue on many occasions.

Eleven minutes to the end of the match, Cameroonian striker Georges Mfegue unleashed a splendid strike to win the game for the Red and Whites outfit.

Five minutes away from the full time whistle, Mfegue missed from the spot as the away team goalkeeper produced a masterclass penalty save to deny Kotoko the second.

Medeama conceded just a goal due to the exploits of their shot stopper who’s taunted as the best goalkeeper in the Premier League.

Kotoko are top of the league table after 13 matches with 30 points and will face Accra Great Olympics in their next match.

Medeama in their next game will welcome struggling Elmina Sharks FC to the dreaded Akoon Park in Tarkwa.

Kotoko have opened a six points lead at the top of the league table after 13 matches with a game in hand against old foes Accra Hearts of Oak SC.