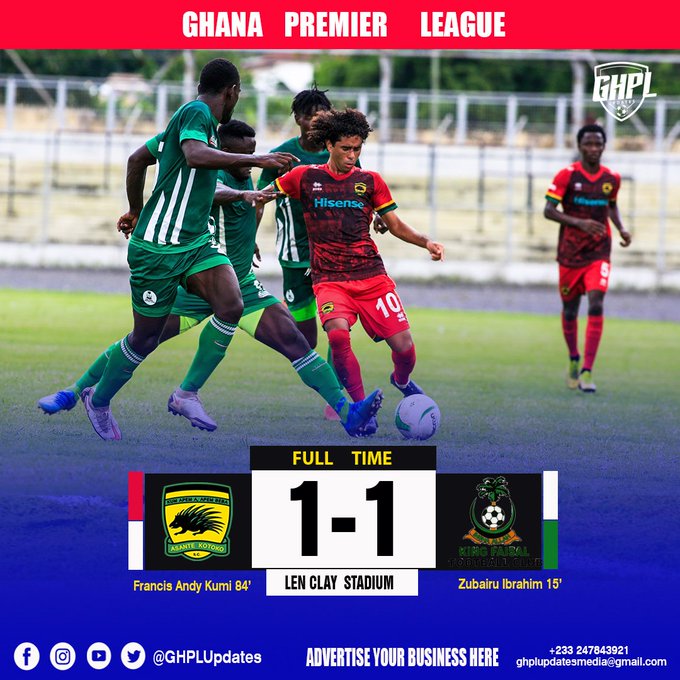 The Porcupine Warriors failed to go level on points with their arch rivals Accra Hearts of Oak SC after dropping points at home to relegation threatened side.

The Green and Whites lads could have claimed all three points at the Len Clay Stadium in Obuasi but had to settle for a point in the end due to their wastefulness in front of goal.

Kotoko had the first clear cut chance of the match two minutes after Kickoff but winger Augustine Okrah fluffed his lines after the visitors goalkeeper went down looking for the referee’s call.

The away team could’ve been reduced to 10-men when right-back, Attah Kusi kicked Brazilian import Fabio Gama Dos Santos in the face but was fortunate to receive only the yellow card.

It was the away team that struck first when youngster Ibrahim Zuberu kept his cool inside the box to slot the ball past Kwame Baah in goal to make it 1-0.

King Faisal should have been awarded a penalty on the stroke of half time when talisman Kwame Peprah was bluntantly brought down in the box by Andrews Kwadwo Appau.

The visitors ended the first half with their noses in front thanks to a well composed finish by Zubeiru.

Kotoko lifted their game in the second but hardly threatened the goal area of the opposition in the early stages of the second 45 minutes of the match.

King Faisal had a lot of clear goal scoring chances but failed to make it count on countless occasions in the second half and allowed Kotoko to grow in confidence as minutes passed by.

Six minutes from the blast of the referee’s final whistle, Imoro Ibrahim swang in a pinpoint cross and Kotoko loanee, Danlad Ibrahim in goal was unable to to punch the ball away from danger as Appau sent the ball back into the six-yard box for a substitute Francis Andy Kumi to head home the equalizer.

King Faisal had three glaring chances after Kotoko restored parity but was wasteful up front and fluffed their lines.

It finished 1-1 and leaves Kotoko two points behind leaders and arch rivals Accra Hearts of Oak SC who have a game in hand against Cape Coast Mysterious Ebusua Dwarfs tomorrow.

King Faisal are now 13th on the league table after 32 matches with 37 points and will play Ebusua Dwarfs in their next game at the Ohene Ameyaw Park in Techiman.