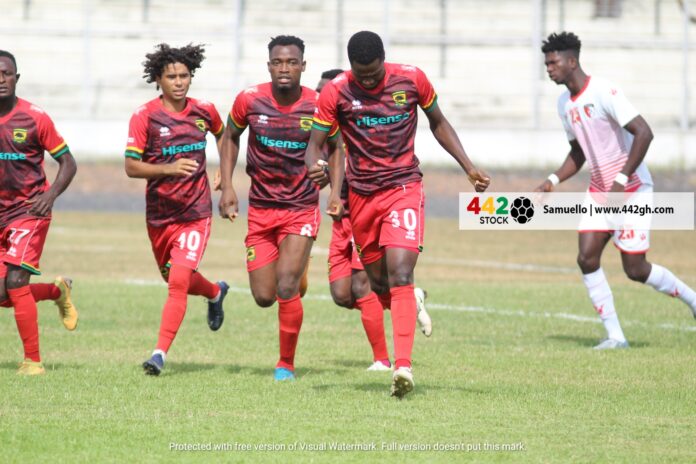 Kumasi Asante Kotoko SC failed to reclaim top spot on the table after they  drew at the Len Clay Stadium in Obuasi on Saturday.

The Porcupines couldn’t   hold on to their early lead as WAFA came from behind to snatch a precious point on the road with a 1-1 stalemate.

Asante Kotoko got the first goal to go in front just two minutes into the game when Abdul Ganiu Ismail converted a spot kick after WAFA goalie brought striker Andy Kumi Francis down in the goal area.

The Academy Boys drew level on the stroke of halftime when former Hasaacas forward Justus Torsutsey headed in a beautiful cross from Lawrence Agyekum on the right side of attack to restore parity before the break.

Kotoko tried to reclaim the lead but could not go past the goalkeeper as it ended 1-1 at the end of the match.

Kotoko miss the chance to go top of the league table as their draw takes them level on points with arch rivals, Accra Hearts of Oak SC who occupy top of the with a superior goal advantage.

IN YOUR FACE: England Delivers Ultimate Clapback at Spain