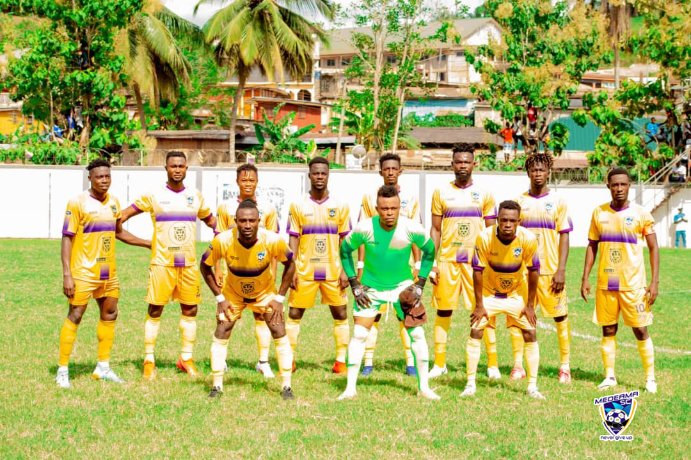 Asante Kotoko were handed a defeat at home by Medeama in a week 21 encounter of the 2020-21 Ghana Premier League in Obuasi on Saturday.

The Porcupines were handed a 1-2 loss by a determined Medeama team as the race for the league title heats up and widely open following after today’s game which see Medeama go top of the league table.

Captain Emmanuel Gyamfi grabbed his first goal of the season on the 13th minute of the match to put the hosts 1-0 up early in the first with a tame header following a cross from Ibrahim Imoro.

On the hour mark, striker Prince Opoku Agyemang grabbed the equalizer for the away team following a poor defensive play by the Red and Whites to make it 1-1 with 15 minutes left to half time.

Just on the stroke of half time, midfielder Richard Boadu scored the second goal for the Yellow and Mauves to take a 2-1 lead heading into the break.

Both teams could not find the back of the net in the second half as the away team became the first team to score two goals against Kotoko in 34 top-flight games and the first since Kotoko’s defeat to Asokwa Deportivo SC in the FA Cup last season at same venue.

Kotoko’s defeat is their first under coach Mariano Barreto who won his two games and drew his third before today’s defeat.

Medeama are temporarily top of the league table after 21 matches with 36 points with Kotoko second on the log with 35 points.

Kotoko will face Legon Cities FC in Accra next week in their next game in the league after losing to Medeama SC at home today.

Medeama on the other hand will battle Ebusua Dwarfs at the Akoon Park next weekend.