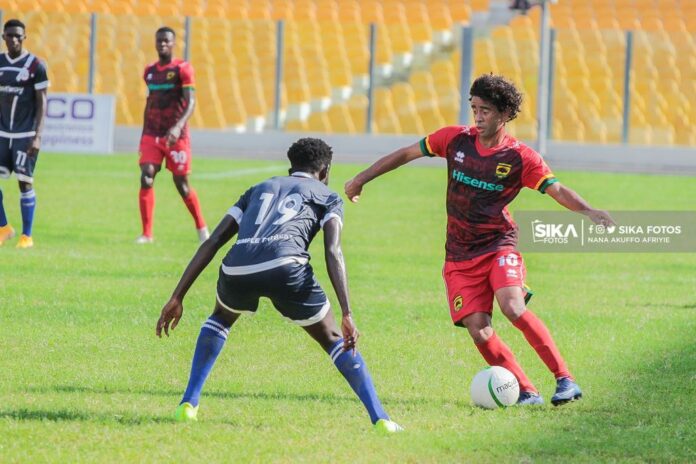 The Porcupine Warriors started the game like a wounded Lions firing from all cylinders in the opening exchanges of the match as they totally outplayed their opponents.

Ten minutes into the game, former Nkoranza Warriors marksman Kwame Opoku grabbed the game’s opening goal to put the hosts 1-0 up early in the when his deflected shot found the back of the net.

After the goal, the Red and Whites did not take their leg off the paddle and continued pushing hard for their second goal but defender Christopher Nettey fluffed his shot in three separate occasions.

Nine minutes after the first goal, Brazilian import, Fabio Gama dazzled at the right side of attack with the ball and his ball found the chest of Opoku who outwitted two defenders to lob the ball over the goalkeeper in a one-on-one situation to make it 2-0 to Kotoko.

Liberty had few chances of their own but most occasions lacked ideas as to what to do with the ball when they reach the attacking third of Kotoko.

The first half ended 2-0 to a comfortable and a dominant Kotoko team whose goalkeeper, Razak Abalora had to make only one save in the opening 45 minutes.

Two minutes into the second half, Liberty were presented with a fine chance but Ibrahim Wayo could not capitalize on the chance to punish the home team with over 40 minutes left to play in the frenetic encounter.

The were no more goals as the game ended 2-0 to the Porcupines who moves to six on the league table with 12 points.