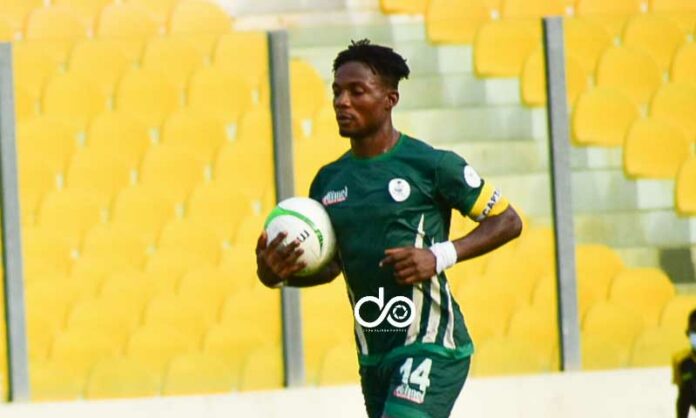 The Kumasi Asante Kotoko SC and Accra Hearts of Oak target, Peprah scored in the first half after 36 minutes to put the hosts 1-0 up before the end of the first 45 minutes in Techiman.

The goal was the striker’s ninth strike this season in the Ghana Premier League after playing sixteen matches for the Green and Whites as they picked a vital and a very important win to boast their hopes of surviving relegation at the end of the campaign.

Liberty Professionals FC could not find their way back into the game as they suffered defeat to drop to 17th position on the league table with 15 points from 17 games.

After their 1-0 win over Liberty on Saturday afternoon in the Ghana Premier League week seventeen encounter, King Faisal now move above their opponents to occupy 16th place with 17 points and a game in hand.

Kwame Peprah has scored nine out of nineteen goals scored by the Insha Allah Boys this season and is already courting interest from Ghana’s biggest clubs Asante Kotoko and Accra Hearts of Oak.