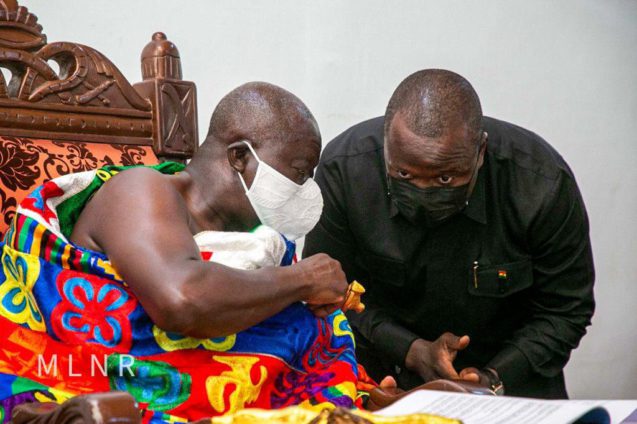 The Asantehene, Otumfuo Osei Tutu II has rejected a section of the Lands Act 2020 that empowers the citizenry to take chiefs to court to account for land sales.

The Act puts the traditional authority in a fiduciary role over lands and empowers subjects to demand accountability over the use of proceeds from land sale.

But the Asantehene, at a meeting between the Ashanti Region House of Chiefs and the Ministry of Lands and Natural Resources stated areas under his leadership are exempt in the application of the Act.

The Minister for Lands and Natural Resources, Samuel Abu Jinapor, led a team from the Ministry to explain the new Lands Act to the Ashanti Region House of Chiefs in their last meeting of the year.

This was at the request of the House.

One of the principal issues that came up was the power the new act gives to the subjects over the sale of land.

“In the new Act, the chiefs are caretakers on the lands. They hold it in trust. So their subjects can demand accountability even in court. In many areas, chiefs misappropriate income from the sale of land”, Samuel Abu Jinapor explained.

However, the Asantehene argues otherwise.

According to him, the Asante Kingdom has its own systems of accountability over the sale of land which they hold in trust for his office.

He said any suspicion of mismanagement by a traditional council is reported to his office for appropriate action.

“The elders of various chiefs are the people who can call for accountability and that is when I step in. There is accountability in the kingdom but not to any individual,” he said.

The Asantehene emphasised, “Not all that is printed here (the Act) is applicable to my jurisdiction. I put chiefs and fetish in charge of the lands in the kingdom. The chiefs are not accountable to any youth”.

The Asantehene advocates a review of laws regulating mineral resources in the country for purposes of equity in sharing of benefits.